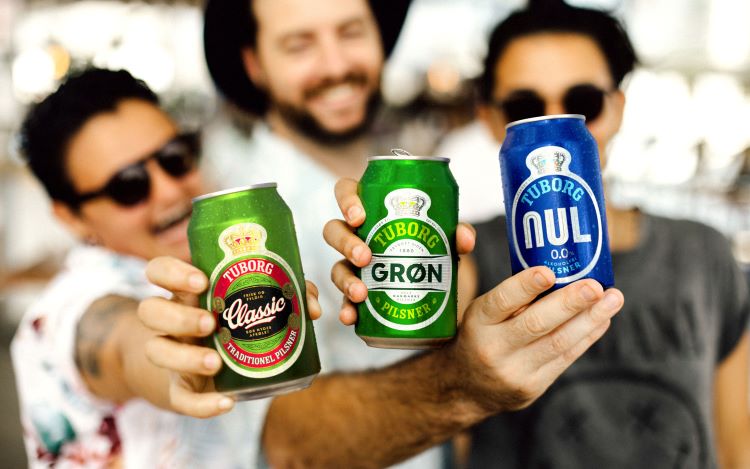 Danish beer brand Tuborg has a new identity which looks to celebrate the main brand symbol, the Danish clockman.

Leeds-based studio Robot Food was appointed following a three-way pitch in 2021. Before now, Tuborg’s branding had not been updated for decades, according to Robot Food creative director Ben Brears.

Brears explains that, because Tuborg is a “Danish cultural icon” and Robot Food is UK-based studio, the design team was conscious about offering “a fresh perspective” while also being respectful of the brand. Rather than executing a complete brand overhaul, Robot Food attempted to “amplify existing assets in new ways”, says the studio’s managing director David Timothy.

The clockman device – or Urmager, which means watchmaker in Danish – has long been the label shape on some of Tuborg’s bottles and is now being used as a framing device across social media and marketing campaigns. “It’s entrenched in local culture and is very much recognised as Tuborg,” says Brears.

He says that Robot Food decided to “bring the symbol to life” across all Tuborg ranges, on bottles and cans, “uniting the brand on shelf”. Off-pack the clockman device and wordmark have been fused together as “a core brand mark”, Brears adds.

While the use of the clockman across all ranges makes it clear that Tuborg sub-brands are part of the same family, Brears says that the studio also aimed to “enhance their individual personalities”. Working with the Tuborg team, Robot Food tried to “clarify what the personalities of these beers are, what unites them, and what helps them stand apart”, he adds.

The idea is that the branding will be cohesive with the new brews that Tuborg has in the works and do all of the “heavy lifting”, making Tuborg appeal to a wider audience, according to Brears. He adds that Tuborg has had to “address changing consumer behaviour” to be more inclusive.

Brears says that giving each brew its own personality and equal footing across the identity, from Tuborg’s Grøn pilsner to its 0% alcohol Nul, opens up the brand to people who are “on the whole drinking less, not drinking at all, or looking at alternatives to beer”.

Though the typeface used for the Tuborg wordmark remains the same, Brears says the studio worked with typographer Rob Clarke “to allow the logo to sit comfortably at a curve on the pack”. Clarke also assisted with the development of the Grøn wordmark, “tailoring it to evoke the typography on Tuborg’s old brewery building in Copenhagen,” Brears adds.

He explains that Tuborg’s “cleaner, bolder appearance” seeks to give the brand “a consistent imprint on shelf” and ultimately make it more recognisable and easier to spot.

The new branding is already live across all core ranges, with wider brand elements currently being phased in.