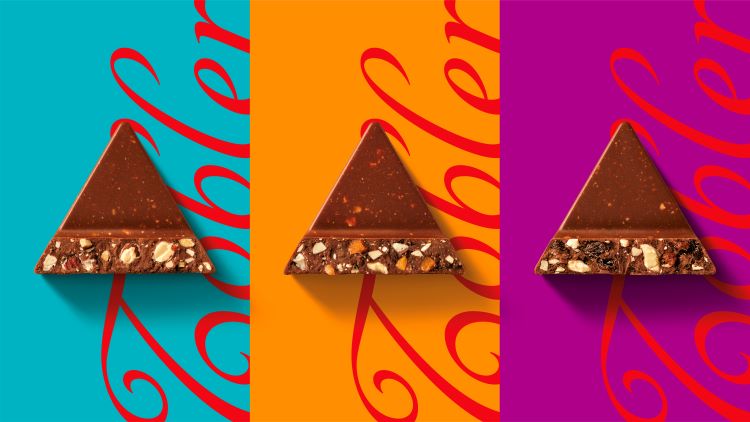 Although Toblerone is a well-loved chocolate brand, it was “in urgent need of modernisation”, according to Bulletproof creative officer Nick Rees. The rebrand aims to make use of Toblerone’s existing assets by adding “new meaning and a multi-dimensional, powerful brand world”, Rees adds.

The most notable change between the old and new branding is the vibrant colour palette. What Rees calls the “timeless colour staples of the brand” – chamois (the cream colour), red, black, and gold – still make up the primary colour palette of the new branding.

Rees says, “We brought in exciting and punchy hints of teal, orange and magenta gave us the modernity we required whilst feeling very comfortably Toblerone.” These are used predominantly in the digital touchpoints, like the new seasonal campaigns.

“Seasonal chunks” is an extension of the brand’s core visual identity. It includes various holiday visuals, like Christmas, Valentine’s Day and Easter, and attempts to bring “an intelligent wit back to Toblerone”, according to Rees.

Though the rebrand reflects Toblerone’s desire to modernise, Bulletproof also drew on its past for inspiration. Rees says, “We dug through the archives which led us to a wonderfully characterful version of the Toblerone logo from 1908.”

He adds that this version is “full of quirks and character”, some of which had been lost over the years. This influenced a change to the wordmark (which has been neatened) and led to the creation of a bespoke typeface called Tobler.

An example of Tobler in use is the signature that appears across multiple touchpoints. “The Tobler signature is introduced as an indicator of the brand’s long heritage in quality”, says Rees.

The wordmark on the packaging now runs over the edge to echo the brand’s message: that we are all “defined by our edges”. This same principle plays out in many other brand touchpoints.

Bulletproof also introduced a photographic chunk of Toblerone to the packaging to act as “a beacon for taste and flavour navigation”.

Ultimately, the new identity attempts to embrace Toblerone’s “rich and quirky” past while also leaving behind some of the more dated elements. Rees adds, “Rather than slowly eroding the brand’s character to conformity, we are embracing its maverick roots with impact, modernity and meaning.”

The rebrand covers consumer experience from physical to digital touchpoints, including Toblerone’s world travel retail experience and new DTC (direct to consumer) site, which was the result of a collaboration between Bulletproof and Media Monks.