The Ambient Machine lets you compose your own background noise 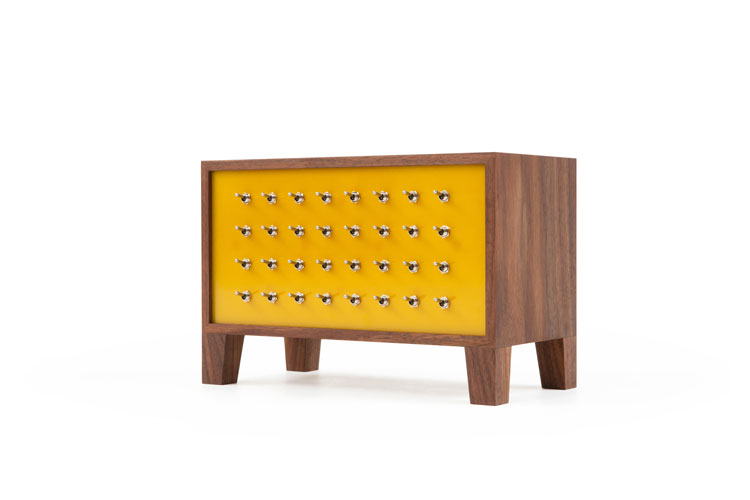 The Ambient Machine lets you compose your own background noise

Yuri Suzuki has designed The Ambient Machine, a device that allows people to customise their own background noise with a number of sounds and effects.

The Ambient Machine has four rows of eight switches. By flipping the first row of switches, you can choose from a range of sounds, from wave sounds, ambient music to white noise. The second row lets you control volume, while the third applies sound effects.

The final row lets you alter the speed. “It’s absolutely customisable for your favourite sound scape,” Suzuki says, adding that it can be altered according to the listener’s mood. The product is 26.4cm in width by 17.7cm height.

Combining sound and music to form “background environmental noise” has a long history, explains Suzuki, citing the work of French composer Erik Satie to Brian Eno’s ambient music. “White noise can mask unpleasant sounds around us and give us a sense of relief,” Suzuki says, while natural sounds can “provide the feeling of relocating to a new environment”.

The is especially important, Suzuki explains, at a time when people have been confined to their environments. Another possible mental health benefit can be found in the musical rhythms which “provide patterns for us to find stability with,” he adds. You can swipe to the final slide in the post below to hear the sounds.

The distinctive yellow interface and walnut surround were inspired by early sketches Suzuki found from his student days at Royal College of Art. “When I struggled for my final project at RCA, I kept sketching shapes or images in my sketch book,” he says. “Somehow all the object ideas are very strong, and I keep realising projects from the sketch book.”

The Pentagram partner and sound designer believes that the pandemic has made people pay closer attention to our sonic environments. “I think people are more conscious about noises now,” Suzuki says, “people have started noticing noises surrounding us.”

“Due to the global pandemic, we found ourselves spending more time living in a single environment than ever before,” Suzuki says. “This provided us with an opportunity to listen more closely to the ambient sounds around us.”

The Ambient Machine was part of furniture brand E&Y’s exhibition Thirty Six Views, which was held in Roppongi, Japan. The initial 20-model run sold out in one day, with each machine costing ¥110,000 (around £680). According to Suzuki, another limited release is planned though a new edution will feature a different sound scape and also a colour variation.