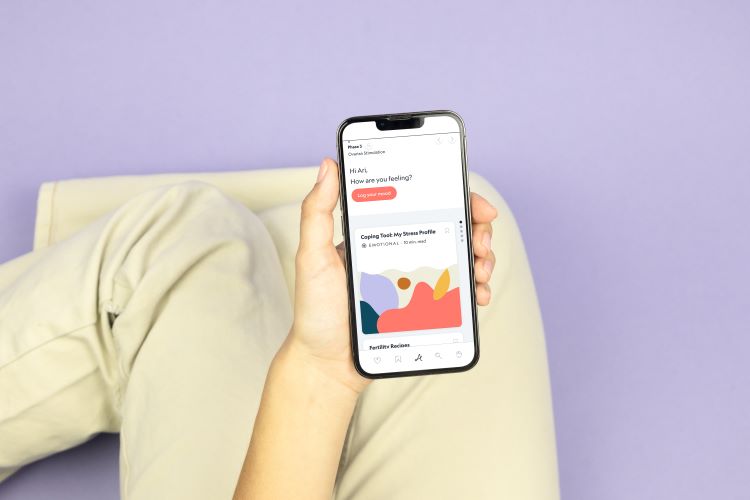 London-based studio Special Projects has collaborated with start-up Aura Fertility to create a new femtech app which aims to improve the IVF experience.

Aura is a support platform that aims to offer personal care to people going through IVF. Special Projects, which specialises in user centred design, conducted interviews with IVF patients in attempt to understand their challenges, implementing its findings into the brand strategy.

The studio’s co-founder and creative director Clara Gaggero Westaway says, “Our research revealed that people going through an unexpected and unpredictable journey such as IVF find predictability and control helpful.” In response to this, the studio designed the app to provide a set number of content pieces per day based on the four core pillars of psychosocial care: cognitive, behavioural, emotional, relational.

One of the main features are the Phase Cards, which intend to give a clear overview of the IVF process and various stages, describing the treatments and possible outcomes. These can be accessed by scrolling left and right on the home screen and aim to break through medical jargon with a conversational style, according to Special Projects.

The studio also developed the app’s logo, icons, colour palette and interface components. “We only used two main colours in the UI to keep it minimal – dark blue and coral – and variations of those as secondary tones,” says Gaggero Westaway. The dark blue is meant to come across as solid, trustworthy, and deep, while the coral is meant to be bright, optimistic, and not too clinical, according to the designer.

Aura’s mood and reflection log is another key element of the branding. The app asks its users how they are feeling daily, in an attempt to simulate a human conversation. She adds, “This helps the content to be tailored to the mood of the user, but it also establishes trust between the platform and the user.”

The Aura app has been designed to fit with what Special Projects calls a “considerate app”, which is respectful and avoid triggering imagery and wording. “We structured the whole app to not be about success or failure, but about supporting the user on their journey, whatever shapes it takes,” says Gaggero Westaway.

One way that the studio has attempted this is by avoiding structures associated with a “to do list”, removing feelings of duty and stress. It also chose not to mention of potential pregnancy, imagery of babies, or sperm and egg icons.

The chances of a successful IVF pregnancy generally increase after three full cycles (6 weeks each) but for some women it can take years, and even then success is not guaranteed. The Aura app aims to function as a constant support system for women on their IVF journeys through giving them easy to access support information and coping tools, as well as real-time human support if they need it.

Aura Fertility says it will collect data to create “the best personalised experience” for their users and use “aggregated anonymised data to inform best practice and research into psychosocial health and whole person care in fertility”. The app is initially available to fertility patients at clinics partnering with Aura and will be free to use for patients.

Picks of the month: design events to look out for this February