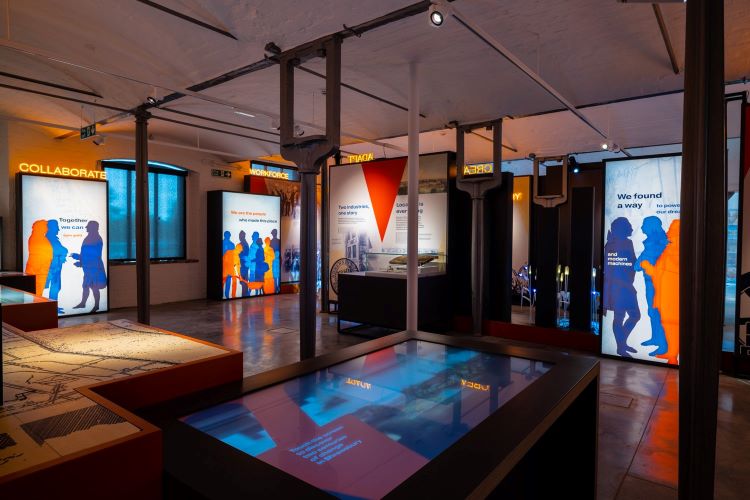 Shrewsbury Flaxmill Maltings has reopened after a £28m eight-year restoration, with a new permanent exhibition – The Mill – designed by Mather & Co.

Historic England carried out the restoration of the site – known as “the grandparent of the modern skyscraper” – which earned an international reputation for its architectural significance. Built in 1797, the main mill of the structure was the world’s first iron-framed building, paving the way for the construction of skyscrapers like London’s Shard, New York’s Empire State Building and Dubai’s Burj Khalifa.

Mather & Co managing director Sarah Clarke says the iron frame is still visible within the exhibition space as Mather & Co’s design aims to “not only work around the historic features but celebrate it as part of the story”. Historic England provided the studio a set of brand guidelines to take inspiration from for its creative approach to the exhibition, according to Clarke and this helped inform elements like colour choices.

Repurposing the once derelict site into “a new hub for the local community” meant crafting “a heritage experience” rather than treating it as “a traditional heritage museum project”, she adds. Mather & Co consulted local people, communities, and organisations “to see what they wanted to do and feel in the space”, says Clarke, as the design team were conscious of making the site’s complex history work for a contemporary audience.

Linking themes explored in the exhibition with contemporary issues like “working conditions, climate change, technology, and pay” is part of the studios unique approach, according to Mather & Co design director Paul Lee. He says, “The exhibition does not shy away from the more difficult questions and even asks visitors to vote on particular matters of its history.”

As the exhibition has been “designed with the future in mind”, Lee says that Mather & Co plans to update it with “new information and questions as they come forward” across the next decade.

Clarke explains that Mather & Co “deliberately avoided using straightforward chronology” to guide people through the space, instead opting for a “free-flow” thematic approach which would “work on busy and quiet days”. Each of the four themed spaces – town and transformation, engineering and building, people and process, and legacy and impact – focus on different aspects of the site’s evolution, attempting to give equal footing to the story of the sites innovation and to the people involved in its history.

Introducing each theme are “illustrations of key characters” encased in light boxes, designed to help “guide people through the space”, says Lee. Above the lightboxes are orange neon words, which seek to provide people with food-for thought as they move through a particular space.

Animated audio-visual elements aim to “bring life to the static exhibition”, Clarke explains, starting with the gobos (go between optics) that introduce the exhibition, recreating a flax and barley field. Another gobo projection resurrects “the original bucket elevator” in the space, demonstrating how it would have turned in its day, she adds.

Clarke also describes the “spectacular floor maltings projection which recreates the distinctive heaps of grain that would have been spread across the floor”. Alongside the projection there is original photography and quotes from the maltster, which serve to tell the stories of the men that worked at the site for over 90 years.

From a 3D mill model demonstrating how site plans changed over time, to an interactive touch table that seeks to celebrate Shrewsbury Flaxmill Maltings’ influence on the town, Mather & Co utilised various digital interactivity components throughout the exhibition. The digital installations serve to revive “long disappeared history and fill in the blanks where the complex site has changed over time”, says Lee.

However, Clarke adds that the studio wanted to build “a suite of different types of interactivity, with some tactile, some sensory and others digital”, explaining that the physical interactives are equally important to the space. “In one space a giant spinning machine takes visitors through the process of spinning thread while in another, visitors can move the floor maltings rake to reveal the maltings process as well as touching and smelling the malt”, says Clarke.

At the end of the exhibition, visitors can enter The North Engine House, which has been converted into an immersive theatre space. After the room was excavated by Historic England, Mather & Co added “dramatic lighting and new walkways” which reveals original objects and features of the space and enables visitors to “walk across and look down on the archaeology below”, says Lee.

On the wall where a steam engine wheel once hung, a four-minute film is projected which Clarke says, “summarises the history of the site in a sensory and contemporary way”. Sounds, effects and lighting surrounding the film is meant to “create drama”, while the film itself is designed to “capture an impressionistic feel and experience of different periods of the site’s history rather than a literal interpretation”, Clark adds.

The exhibition, along with its supporting programmes and activities, is now open and will be a permanent fixture on the Shrewsbury Flaxmill Maltings site.