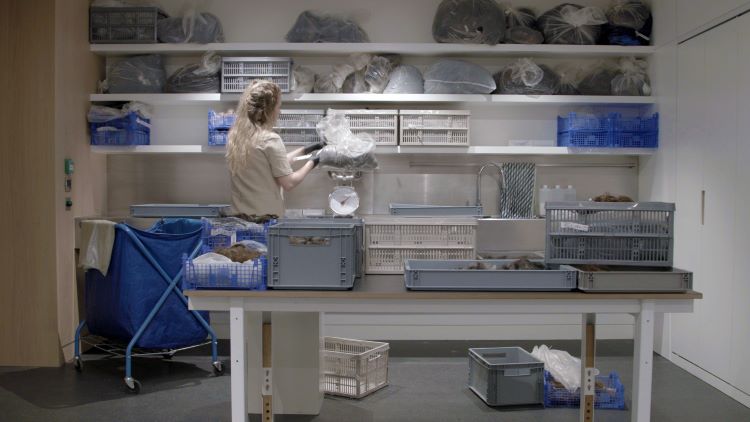 The Design Researchers in Residence programme has revealed four climate-related projects, from a pollution-absorbing seaweed to wearable furniture.

Design Researchers in Residence is an annual programme at London’s Design Museum where designers are invited for a ten-month residency to address a given theme.

The name of this year’s programme, as well as the brief given to the designers, differs from previous years, as the 2021/22 cohort were encouraged to submit designs supported heavily by research which fall into the theme of restore.

The display is part of the Museum’s flagship Future Observatory programme, in partnership with the Arts and Humanities Research Council (AHRC). Design Museum director of Future Observatory Justin McGuirk explains that the choice stems from the climate crisis as “restoration is becoming a valuable mode for design and research practices”.

The display will feature projects that cover multiple disciplines. According to the museum’s Chief Executive and Director Tim Marlow, this year’s cohort has presented “varied, thought-provoking and potentially game-changing ideas”.

Thomas Aquilina’s project focuses on spatial and environmental injustice in London, particularly in the Royal Borough of Kensington and Chelsea. Over the course of his residency, he went on multiple walks across this borough which is considered to be one of the most economically unequal areas in the country.

From this, Aquilina created a documentary film and a new kind of glossary. This collection of words and images aims to speak about social injustice and how it exists in the borough’s most well-known sites, from the Westway and Holland Park, to Grenfell Tower and the Design Museum itself.

Aquilina had a variety of people accompany him on these walks to speak on the topic. As well as local residents, he involved writer and editor of Tank magazine Ekow Eshun, former Kensington MP Emma Dent Coad, and the RHS Chelsea Flower Show award-winning gardener Tayshan Hayden-Smith, who is known for “greening” abandoned urban spaces like the Grenfell site.

The 33 terms in the glossary – such as race, climate and gardening – are defined through a combination of texts written by Aquilina and the conversations he had with his guests on the walks. The glossary is then printed in a pamphlet-like book which is meant to be rolled out across the space like an art work.

A future with wearable furniture

Another of the designers, Delfina Fantini van Ditmar, took a more futuristic approach to her project, presenting a speculative exploration of the relationship between warmth, fashion and architecture.

Her ideas were born out of the context of the current energy crisis, ongoing war, increasing pollution and environmental damage. Fantini van Ditmar and her collaborators aim to imagine an alternative scenario for a future world in which domestic comfort is fundamentally different to how we view it today.

A resourceful approach to reuse is prominent in this future, where waste materials become experimental clothing and furniture to keep us warm and comfortable. Her future-facing designs include an adaptable waterproof shelter which features discarded clothing and attempts to offer a new type of home suited for forest-based life. Another piece in her display is the Pinch, which is a piece of wearable furniture that can also function as a chair and can be transported on a person’s back.

Improving the health of UK water

Fellow designer in residence Samuel Iliffe’s exhibit is a seaweed farm designed to address freshwater pollution. The seaweed naturally extracts phosphorus from the water to use it for its own photosynthesis and growth, and it can be transported easily to areas where phosphate levels are high.

According to a recent study by the Environment Agency, not a single river, lake or estuary in the UK is classed as “in good health”. Iliffe’s design hopes to address the number one reason for this: phosphorus pollution.

Phosphorus is a harmful by-product of agricultural production. This lightweight, transportable seaweed farm created by Iliffe is meant to remove phosphorus from waters that are at risk of pollution.

Sanne Visser’s display includes the 97 hairdressers and barbers within one mile of the Design Museum. On average, each of these will cut off 2.4 kilograms of hair every month, most of which will end up in landfill.

Visser recognised human hair as a highly versatile material which, like wool, can be processed for use as a yarn or textile. Hair can also be broken down to its chemical components for medical uses or even as a plastic alternative.

Through showing prototypes of new equipment that she has designed, Visser hopes to establish a national large-scale hair recycling system, including a barber’s chair that captures cut hair for sorting.

The free exhibition will run from 24 June – 25 September at London’s Design Museum. For more information, please visit the museum’s website.