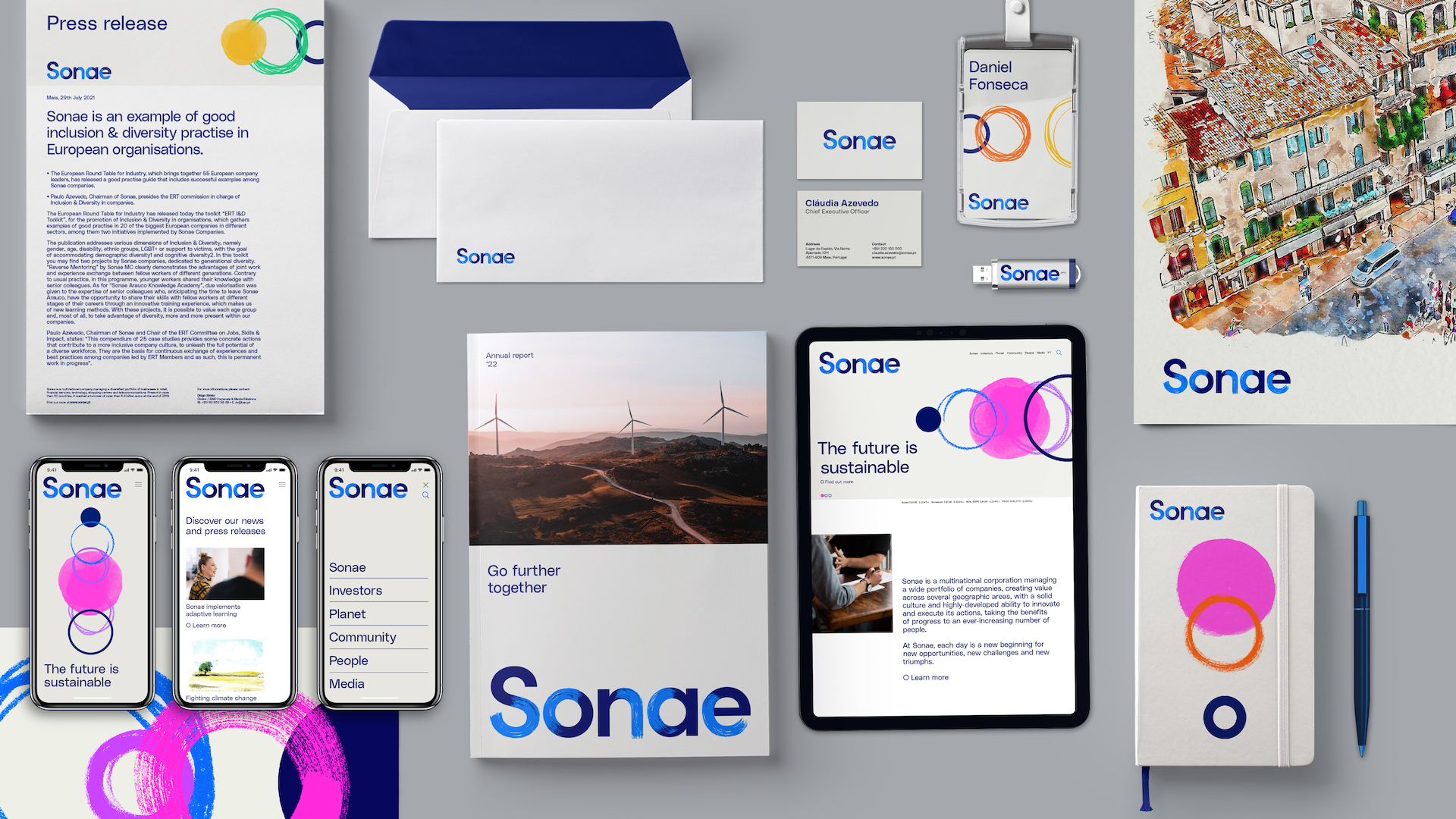 When Saffron was hired by the corporate conglomerate Sonae, it was brought in as a strategic partner to assist the company. The job was more about “tweaking and adjusting” than anything to do with design Saffron creative director Matt Atchison explains. Sonae is somewhat of a household name in Portugal and is the country’s biggest employer, an umbrella brand with business areas touching many sectors of the economy, including retail.

The company wanted, in contemporary fashion, to align its vision for the future – centred on values like sustainability and employee welbeing – with its strategy, which was outdated.


This brief then expanded to include a full rebrand. “Trying to create an identity for an organisation as diverse and global as that is very difficult,” Atchison says.

“You’re trying to capture something beyond what they’re doing; more about who they are,” he adds. Atchison recalls getting the sense that Sonae, besides the needs and objectives inherent in being a corporate business, “feel like they have to have a responsible role in the country.” Environmental, Social and Corporate Governance (known as ESG) is certainly a buzzword these days but, Atchinson adds, “we were really impressed that it was built into their DNA. They came across as really obsessive about doing the right thing by society.”

The studio responded to the creative challenge with a new logo formed of a juxtaposition of brush strokes and vectorial letterforms, a brush stroke being “a typically human thing,” according to Atchinson.

He adds, “Anybody can identify it and immediately identify humanity, that sense that when you put brush to paper, it’s an intention, an expression, a will to communicate something.” Whereas the vectorial lines transmit a “more mechanical, rigurous, robust aspect,” which was another core idea the company wanted to focus on.

The logo was built with this play between those two styles, but also with a visual language that resonated with the history of the brand, as a circular-themed visual language had been part of Sonae’s heritage since the 1980s.


Beyond this essential expression of the brand, Saffron worked to build a complete visual language for them – a new art direction and a new typeface, colour palette and icon system, all of which were included in a full kit of design assets which was given to the company.

Unusually for this kind of commission, the CEO, Cláudia Azevedo (daughter of the man who built the empire, Afonso Pinto de Magalhães), was involved at every step of the way. “She had us doing all sorts of tests and was really hands-on during the creation of the logo,” Atchison says. “She was interested in the bruststroke versus vectorial detail.” She even appeared, he recalls, in a photograph received from the team in Portugal of signage tests on the headquarters’ facade, making sure to not miss a beat.