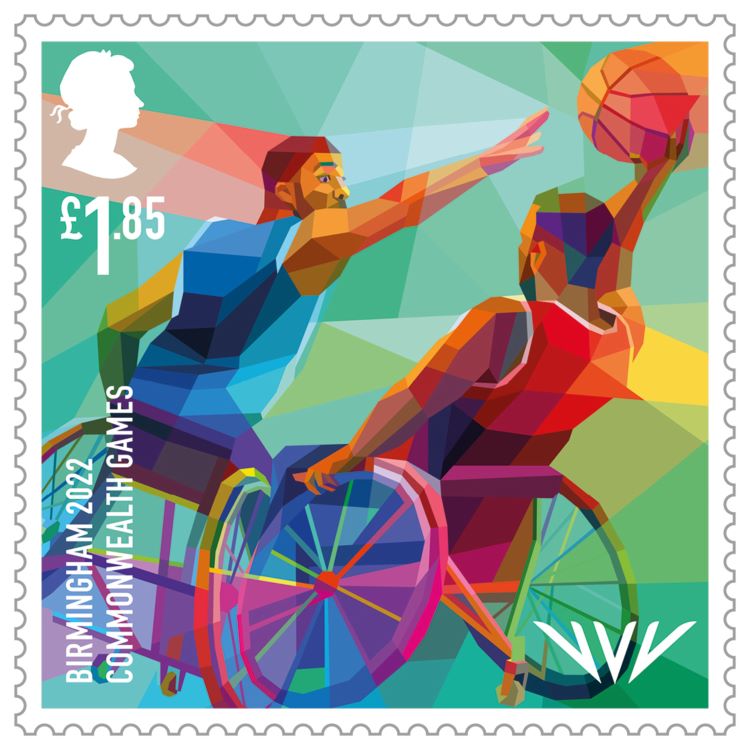 Interabang has designed a set of eight stamps for the Royal Mail to mark the Birmingham 2022 Commonwealth Games, featuring geometric illustrations and a vivid colour palette.

Early in the project, the studio decided it did not want to use photographic or photo realistic depictions of athletes. Interabang creative director Adam Giles says they were keen to explore “more abstracted illustration techniques” that would be representative of the sport.

The London-based studio commissioned Greek artist Charis Tsevis for the project. Tsevis is known for using mosaic and neo-futuristic compositions in his work – a distinct style which is demonstrated in the Commonwealth stamps.

Royal Mail has regularly issued stamps to mark the Commonwealth Games being held in the UK. Most recently, it commemorated Manchester 2002 and Glasgow 2014 with special stamps to act as lasting souvenirs of the event for collectors and fans.

Over the years, Interabang has also been involved with the design of multiple stamp sets, however, Giles explains that this project was different. He says, “Historically there have been lots of sporting stamps, including ones celebrating previous Commonwealth Games, so we were keen to bring something new to the table aesthetically and creatively.”

Another aim was to “capture the excitement, energy and emotion of sport” and convey movement through the stamps. Giles adds, “The shards of colour that Charis uses in his art answered this brief perfectly, whilst also giving a contemporary urban feel as a nod to the host city.”

Interabang also tried to demonstrate the energy and passion of the sports through the colour palette. Each stamp is designed to have its own distinct colourway, while also having a “jewel-like palette that gives them cohesion as a set”, according to Giles.

This year’s games not only mark the 22nd anniversary of the event, but also the first time in any major mixed sporting event there will be more medal events for women than for men. In addition, para sports are now fully integrated within the games rather than having its own separate event.

As a result of this change, representation and inclusivity were “an integral part of the brief”, which the design team revisited continually throughout the project. The stamp illustrations attempt to equally represent male and female athletes as well as para-athletes.

Alongside the eight stamps, Interabang also designed a presentation pack, first day cover, post marks and a coin cover in association with the Royal Mint.