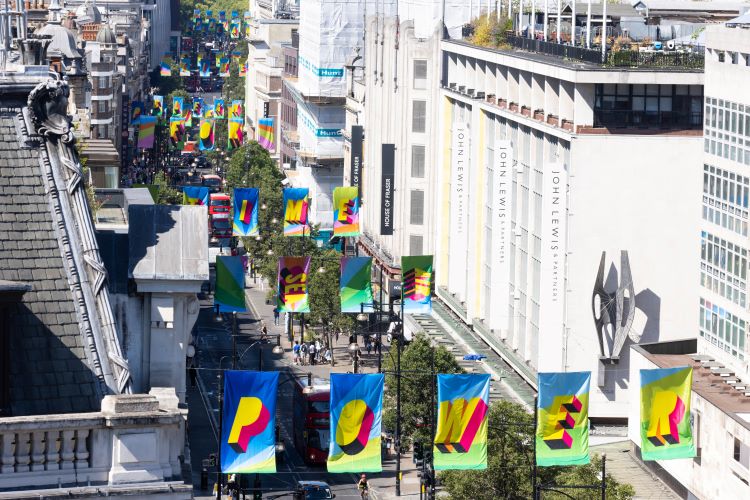 Morag Myerscough has designed an aerial installation of 105 flags which spans the length of London’s Oxford Street to draw attention to The Clean Power campaign.

The Clean Power campaign is an extension of the #TOGETHERBAND movement, which has run since 2015 and aims to find ways to humanise the United Nation’s 17 global sustainability goals.

#TOGETHERBAND commissioned Myerscough and worked alongside the New West End Company – a business partnership of 600 UK and international companies, anchored by Bond Street, Oxford Street and Regent Street – to bring the project to bear.

Myerscough explains that when she was approached by the Clean Power team, she was already transitioning into a more sustainable lifestyle herself. “It was perfect timing for me and lined up with what I had been thinking,” she adds.

The installation marks the first time that an installation on Oxford Street has supported an environmental cause. Staying true to her bold style, the colour palette for the flags comprises bright hues of pink, orange, blue, yellow and green.

Although she knew she would create something “strong and colourful”, Myerscough says that legibility was also an important consideration. The shadowed 3D lettering is meant to “jump out and you and have a real presence in the street,” she says.

“The words sun, sea and air were also really important to me, because they’re the elements and they’re key to renewable energy,” she adds. On why her style suited the project, Myerscough explains that a key focus of the campaign was to encourage “a positive approach to sustainability.”

#TOGETHERBAND co-creator Oliver Wayman says that Myerscough’s style is “not too conceptual”, meaning the message is immediately clear. He adds that art and design as a medium “lent itself to the project really well” as they wanted to avoid “drowning people in stats”.

The bright nature of the flags is meant to inspire solutions-based thinking rather than “making people feel guilty about not doing enough”, Myerscough adds. “Whatever the response is, as long as people notice it and start a discussion, it is doing its job.”

Made from second generation marine plastics, the flags support the sustainable mission. Wayman explains that it took “3300 plastic bottles, which were then ground down and made into a yarn to make the 105 flags”.

According to Myerscough, the work is particularly accessible as it’s hung outside, ensuring that it can “connect with more people”. “You don’t have to go behind an art gallery door to see this – it’s right there as you walk out of Bond Street station,” she says.

As Oxford Street is the busiest street in Europe with the highest footfall, the campaign will be given mass exposure to both businesses and the public. Myerscough adds, “An amazing amount of people from different ages and cultures come down this street, whether that’s tourists or local people.”

The installation will be in London for four weeks before moving on to other countries around the world, including Japan, USA, Italy, Australia and New Zealand.

Once the campaign is over, the flags will be made into bags, giving them a third life. Wayman reveals the #TOGETHERBAND is also working on sourcing new biomaterials, “trying to find the ones that are resilient but also work in the circular economy”.