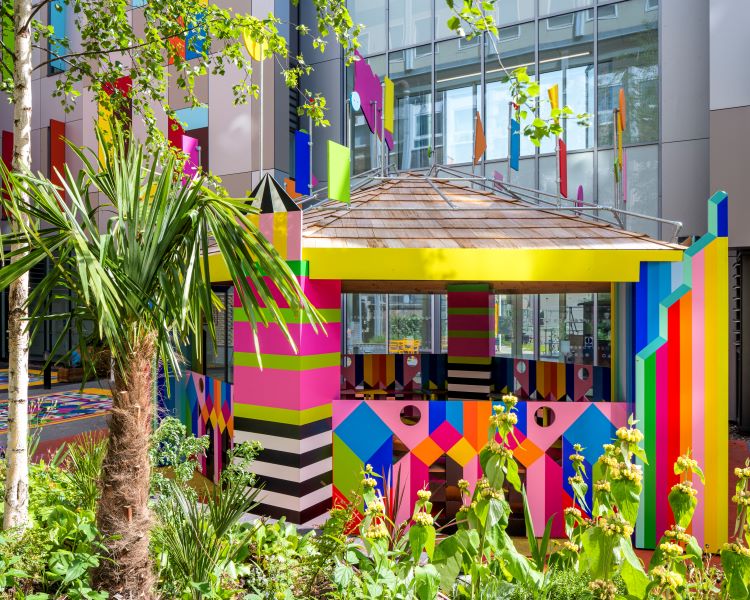 Morag Myerscough has worked alongside Sheffield Children’s Hospital and its charitable arts programme Artfelt on a project which saw an underused courtyard space on the hospital site transformed into a colourful garden pavilion.

Artfelt is The Children’s Hospital Charity’s art programme committed to collaborating with artists and designers to renovate Sheffield Children’s Hospital’s walls and spaces with vibrant, cheerful art. Its aim is to help children recover in a comfortable environment designed especially for them.

Myerscough’s first collaboration with Artfelt in 2017 saw four unusually colourful interior designs implemented across forty-six ensuite bedrooms and six wards. She has kept a close relationship with the hospital, its patients and its staff, which is how she found inspiration for her most recent project, Joy Garden.

After Myerscough visited the site with the former head of Artfelt Cat Powell, they decided that the outside courtyard space was undervalued in its current state, recognising its potential to make a difference to children, families and staff.

The result is a brightly coloured pavilion and outdoor seating area with crisp painted lines and 3D effects making it look more like a render than a real structure against the backdrop of the hospital building. Geometric patterns have been applied to both the exterior and interior of the main pavilion, and through to the surrounding seating and garden.

Myerscough took no fee for her work and says that with the support of sustainable personal care brand Method, which previously collaborated with Myerscough on packaging designs, she was able to fund the project with no upfront cost to the hospital.

A deliberate decision was also made to work with local craftspeople on the build. Sheffield fabricator Design Workshop Ltd made the main structure of the Joy Garden, while the panels were painted by Myerscough in her studio using paint from YesColours, which gifted the paint to the project.

The garden’s geometrical colour-infused flooring was provided by Geveko Markings. The floor mural was originally designed for another public artwork in London, but after the project was cancelled, Myerscough was able to repurpose it for the Joy Garden project.

Banner image and all other images by Gareth Gardner