“It’s important to be honest”: Misty Buckley on her Commonwealth Games designs 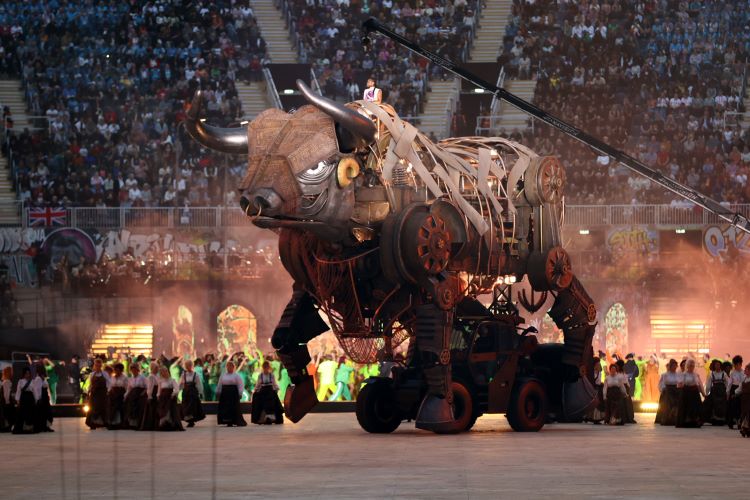 “It’s important to be honest”: Misty Buckley on her Commonwealth Games designs

Misty Buckley’s designs for the opening and closing ceremonies of the 2022 Birmingham Commonwealth Games aimed to “touch on all the difficult and messy parts” of the city’s history, as well as the positives.

Taking on the role of production designer in both shows, Buckley oversaw the design of all the staging, sets and prop elements. For each two-and-a-half-hour ceremony, Buckley worked to pack in as much detail about “the greatness that has come out of the West Midlands” as possible.

However, Buckley adds: “It’s important to be honest and reflect the true nature of a city, when you are recreating it.” Some parts of the opening ceremony demonstrated the darker side of Birmingham’s history in the form of a ten-metre high, 2.5 tonne bull, made from machinery from Birmingham and West Country factories.

According to the Birmingham 2022 Organising Committee, the bull is “scarred by historical hurts and its headpiece is inscribed with the names of victims of multiple historic injustices”. Intertwined and “scored” into the bull’s armour together were the names of the female Black Country chain makers, of the 1974 Birmingham Pub Bombing victims, and the Birmingham Six who were wrongly imprisoned.

The Birmingham 2022 Organising Committee describes it as “a form a cultural tapestry of Birmingham’s lived experience and suffering”. The bull also alluded to Birmingham’s history of bullbaiting.

In a lighter reference to Birmingham’s imperfect present-day reputation, Buckley says one scene in the opening/closing ceremony saw “a shopping trolley and bike thrown into a fabricated canal” as a way of “reflecting the authenticity of the city”.

To celebrate Birmingham’s part in innovation and invention, Buckley created “the Carnival of Firsts”. During this part of the opening ceremony, “a caravan of weird and wonderful trucks” entered the arena. Each truck was designed to showcase a different invention, “from buttons and pen nibs to police whistles and the Baskerville font”, says Buckley.

To showcase Birmingham’s innovation in the automotive industry, Buckley invited Birmingham residents to drive their own cars in the stadium, as a way of “bringing real life” into it.
In total, there were 72 cars from across five decades, which were all manufactured in the West Midlands.

Buckley explains that other highlights include the “phenomenal detail” of the tower, as well as the brickwork, arches, and graffiti. The signage around the canals was also a large focus, according to Buckley, with the lectern being based off of a canal signpost.

Buckley adds that her team tried to create everything so that it resembled an “exact replica of the city”. She even went as far as including a speed camera and central reservation in her interpretation of the M6.

For the 2022 Commonwealth closing ceremony, Buckley worked alongside Amber Rimell and Brosnki, the creative director/choreographer founders that make up Tawbox. Buckley’s focus for this ceremony was on set design, as the event was largely based on celebrating Birmingham’s music scene.

The multi-level multi-stage set was meant to mimic “the movement, rhythm and textures” of the production lines and factories of the West Midlands, according to Buckley. She adds that she designed the brick chimney erected on the stage to be “transformative”, as it acted as a factory chimney, a tower, buildings of the city and a backdrop for text and imagery.

Continuing the factory feel, Buckley says she incorporated conveyor belts into the two large bridges that flanked the set, as well as “rendering the stage with various metal finishes”. There were also steel mesh decks embedded into the floor of the stage, which were “under-lit with powerful beams of light, like those that you would see in a factory”, Buckley adds.

Brosnki and Rimell went against the “shiny floor music show” that was detailed in the initial brief. Instead, Tawbox aimed to create a show that was “fast-paced and true to the area” and championed the city’s “music, culture, diversity, working-class heroes, and […] pride”, says Brosnki.

Rimell explains that their goal was to “give artists past and present” a chance to celebrate their music creativity with a “2022 twist”. She adds, “We also were very passionate about giving the younger talent a platform to excel in their genre and for young people to feel inspired.”

Working with Buckley, Tawbox created a 360 design that could “work with performers in multiple ways”, according to Rimell. She explains that there was an extension of the chimney tower called “the wheelhouse”, which was used as an entrance and exit for cast and camera crew.

Buckley adds that the most difficult aspect of the creative process as a whole was working remotely. “The creative, design and model making process really benefits from creatives being in the room together”, she adds. Times that the team were able to get together were “incredibly focussed and productive”, according to Buckley. She says she worked closely with artistic director Iqbal Khan, her associate designer Laura Woodroffe and Costume Designer Michael Sharp to “keep the creativity flowing”.

Another major challenge was that many Birmingham-based set contractors and suppliers had closed down due to the pandemic. Buckley says, “Because of this, we were determined to give them the contract and do our utmost to keep them in business and they did not let us down.”