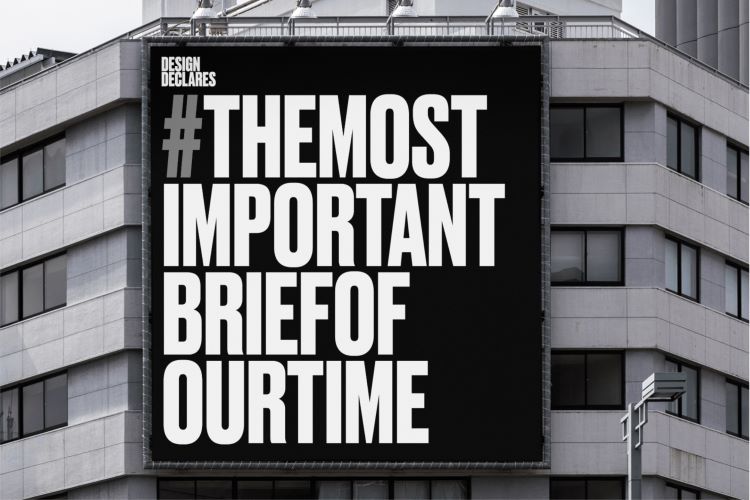 The campaign targets communication, digital, industrial, and service designers and aims to encourage them to take action through eight “Acts of Emergency”. According to Thomas Matthews founding director Sophie Thomas, who is also a founding member of Urge Collective, the effort started following the Design Council’s Design for Planet festival in a bid to “keep momentum after COP26”.

From the perspective of Thomas Matthews studio, it was “very difficult to find somewhere where [designers] could have a voice in the climate emergency”, says Thomas. There are already many similar Declares initiatives running in other industries including architecture and engineering.

Thomas had already signed up to Architects Declare as it was the campaign most similar to design. When it came around to putting together Design Declares, she says she already knew it would need to offer designers “a lot of guidance and leadership”.

Once designers have signed up, they can access the declares toolkit, which is there to show them exactly how they can respond to and work towards fulfilling the eight acts. Thomas says they can also “find support” from other studios who are signed up during regular catch ups and LinkedIn groups.

Short term goals of the campaign include “getting as many signatures as possible” and “building a voice” for the design industry, explains Thomas. She adds that the industry’s current input on the issue has been “quite scattered”.

Thomas says, “We know there are a lot of people in the design industry who are getting more and more frustrated that nothing is really being done, even though we are an industry that’s really driving change and having an impact.”

Some might question why designers deserve to sit among policy makers and scientists during climate crisis conversations. The answer is that “80% of a products environmental footprint is predetermined at the design phase”, according to Thomas.

This is why some of the campaign’s longer term goals focus on building a “knowledge network” and “accelerating the toolkit area”, as Thomas says that this will designers to understand what best practice is. She adds that “drawing government attention” to Design Declares is also a priority which, in turn, should result in “new guidance and regulations”.

Since its launch last week, the campaign has received almost 100 signatures from designers, studios and institutions. With continued support from the Design Council and those already signed up, it is hoped that Design Declares will reach its 1000 signature target by this year’s Design for Planet festival in November.

The festival will feature talks and information on the campaign, which will help it move into its second phase – refining the guidance and signposting updates to encourage more designers to join.

Thomas’ hope is that joining the campaign will have a knock-on effect on the types of projects and clients that studios take on, meaning they can “influence clients” to choose more climate-friendly outcomes.

Signing up to Design Declares is free and multidisciplinary studios, who might also cross over into interior design, architecture and engineering, can join more than one Declare campaign.