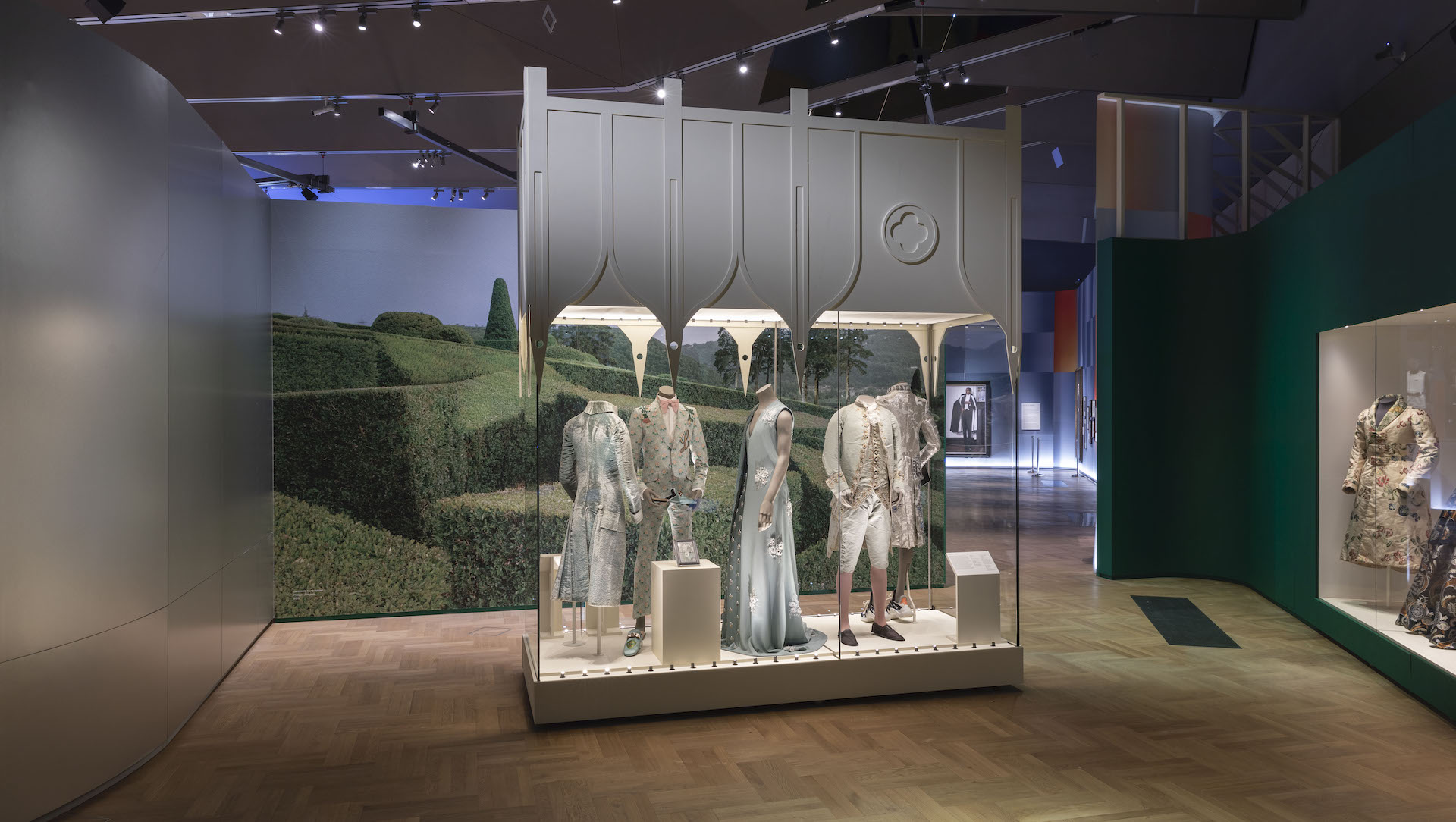 A new exhibition on fashion and masculinity has opened at the V&A, and its design is as eye-catching and thought-provoking as its contents. Both elements work together to make the viewer an active participant in a journey through gender, identity and adornment. Architecture and design practice JA Projects was commissioned to conceive and create the desing for Fashioning Masculinities: The Art of Menswear.

“Rather than a linear or definitive history, this is a journey across time and gender”, according to co-curators, Claire Wilcox and Rosalind McKever, and the sensory design reflects this ambition. JA Projects’ spatial design breaks the exhibition into three parts, taking visitors from the ancient past to the present day — “from Piazza to Pizzazz,” as the practice has described it.


JA Projects partly won the commission on the strength of previous project “A House for Britain,” a proposal which re-imagined the British Pavillion as a house, calling for British architecture to be more inclusive towards a diversifying world, and grappled with the colonial ideas behind country houses or “the cult of homeownership.”

The project was shortlisted for the 2019 Venice Biennale (Jayden Ali has since been selected as part of the team that will represent Great Britain at next year’s Biennale.) And Ali sees it as the clear “genesis” of the practice’s response to this show: both focus on putting together an alternative canon and readjusting existing power structures in the architecture and the fashion worlds, but also in the societies they reflect. Meanwhile both play on classicalism and are concerned with articulations of objects via immersive spaces.

“We wanted people to feel like they were part of the show,” Ali says. “From the initial moment, we were trying to put together a visitor journey that made people reflect on themselves for a moment, and then find themselves in relationship to the spaces and the objects.” The opening lobby is a single grey-green suit, and it’s a bookend to the finale.

That single suit “is about abstraction, the questioning of contemporary notions of masculinity and fashion, and deconstruction of those historic notions – but it is a single suit, and that’s important, because it has a palette cleanser sound, white noise. That moment is for people to think about themselves in relationship to that suit, and to start to embody it. It’s not a garment that’s aligned to any gender.”


At the end of the show, the visitor becomes part of the exhibit as they enter a room that is half mirror, half video artwork by Quentin Jones with Cadence Films, becoming, through their spacial presence, an active part of the show and a celebration of diversity of plurality.

In between those bookends is the bulk of the show. The first part, entitled Undressed, focuses on the male body and how classical antiquity has influenced European ideals of masculinity. Entering the airy space, the visitor is surrounded by monumental sculptural forms that evoke classical proportions and ideals. Gods and heroes are surrounded by draped fabrics, and surrounding them is an oversized and abstracted depiction of black bodies.

The second part is all about theatricality and peagantry, and is placed across four rooms reminiscent of a grand country house, celebrating the luxury and flamboyance of menswear as a signifier of power and wealth – and this is accompanied by a soundscape of West African Highlife music. Ali wanted to “make people feel like they’re getting ready for a party.”

The luxurious European house (with influences like Versailles and rococo) is radically juxtaposed to an artpiece prominently displayed in the middle of the room: Yinka Shonibare CBE’s photograph “Diary of a Victorian Dandy: 17.00 hours,” depicting the artist, a black man with a physical disability, using the fashions and conventions of 19th-century high society as a pathway to empowerment.


“Redressed,” the third section, reflects on mass consumerism and the capitalisation of clothing. Where “Undressed” was subtlety (with mostly cream and white colours), “I wanted it to feel chapel-like,” Ali says, in “Redressed” all the objects are black, the city and mass production take centre stage, and materials take on the hardness of urban structures.


Because the show is as much about the ways in which designers, tailors, artists and their clients and sitters have constructed and performed masculinity as it is about the evolution over the centuries of what falls under the umbrella of menswear, the exhibition is meant to make the visitor feel more like they are stepping into stages than they are slowly being presented objects.

“You [the visitor] are the performer and you are foregrounded at the beginning and at the end.” The approach applies even in the smallest of details. Ali commissioned French outfit Studio Hugo Blanzat to design the 2D elements and typefaces, and this collaboration extended to creating object label stands, which feature bespoke illustrations instead of traditional descriptive texts. These expand and contract and they are printed in material which is, fittingly, fabric stock.