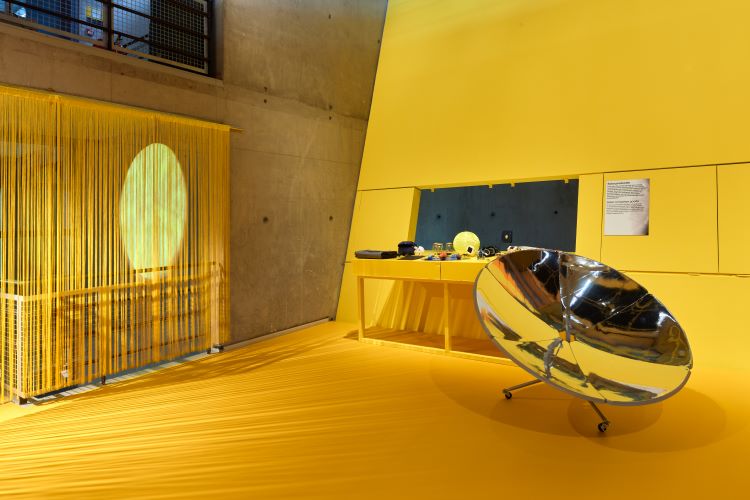 The Energy Show – Sun, Solar and Human Power has opened at the Het Nieuwe Institut in Rotterdam and aims to investigate what the world would look like if it ran on solar energy.

The exhibition is part of the first Solar Biennale for which the Het Nieuwe Institut is a partner and main venue. The Solar Biennale is a solar movement started by solar designers Pauline van Dongen and Marjan van Aubel and seeks to catalyse a bigger conversation about how people can embrace the power of the sun through design.

Presenting projects by designers, researchers and artists world-wide, the exhibition hopes to open a door into a post-fossil fuel future. According to designer and curator Matylda Kryzykowski, it “tells a story of humans’ relationship with the sun”, highlighting how it has shaped our lives.

Visitors are first invited to consider the culture of their own energy consumption with the question, ‘Do you have enough energy?’ posed at the start of the exhibition. They are then encouraged to follow the chronological narrative of the last century’s solar developments, as “a holistic, transdisciplinary impression of social, political and personal events around sun, solar energy and human power,” says Kryzykowski.

The Energy Show includes details of Edmond Becquerel’s discovery of the Photovoltaic Effect (that idea that sunlight can produce electricity) in 1938 and “the world’s first residence heated with solar energy” designed by scientist and inventor Maria Telkens a decade later, says Kryzykowski. Moving forward in time, it explores designer Jörg Boner’s construction of the Solar Mobile, which competed in the first solar powered car rally, Tour de Sol.

More recent milestones celebrated through the exhibition are social entrepreneur Illac Diaz’s development of a DIY light in 2018, engineering student Carvey Ehren Maigue’s designs for solar panels made from food waste in 2020, and curator Martina Muzi’s course which analyzed the culture of energy consumption at Design Academy Eindhoven in 2021.

Kryzykowski’s hope is that “visitors will reflect on energy in general, questioning their own energy use and habits relating to energy consumption” after seeing the “bigger picture” of our relationship with the sun.

Quoting Donna Haraway’s 1985 manifesto, Kryzykowski says, “Our best machines are made of sunshine; they are all light and clean because they are nothing but signals, electromagnetic waves, a section of spectrum, and these machines are eminently portable, mobile…”. Kryzykowski adds that people should be thinking about “what energy means to them, not only in a technical sense but in a personal sense” before moving on to “making policies and designing solutions”.

The exhibition design has been led by Dennis Vanderbroek who explains how a screenshot of Kryzykowski’s desktop from their very first meeting (showing a plan of the sapce) was “physically translated into the spatial design” of The Energy Show. With direction from Kryzykowski, the team from studio Dennis Vanderbroek “tried to create a physical awareness in both the space of the exhibition and its visitors” by “activating the scenography”, Vanderbroek says.

He adds that the exhibition has “a very tactile and physical quality” which seeks to encourage visitors to engage with questions, ideas and perspectives on solar energy. “The entrance is one of our favourite elements of the show,” says Vanderbroek. He describes that, upon entering, visitors will come to a revolving door which is “the colour of the sun’s gradient”. As they go through to the first room, lights will be activated.

A smaller version of the exhibition called The Solar Energy Kiosk will travel to Milan during the Salone del Mobile design fair in June 2023. Designed by Rotterdam-based studio Cream on Chrome, the solar powered kiosk features an orange juicer, which aims to “represent energy in the form of a cup of juice,” says Kryzykowski.

The orange juicer is a standard electric orange juicer, except it is solar powered. It is meant to provide a physical representation of how much energy is being produced at that moment, in relation to how freely the juice is poured.

She adds that the kiosk will also serve as “a drop off station for people’s solar ideas”. During last year’s design fair in Milan, Kryzykowski says “hundreds of people came and drew ideas around the sun”, some of which will feature in The Energy Show.