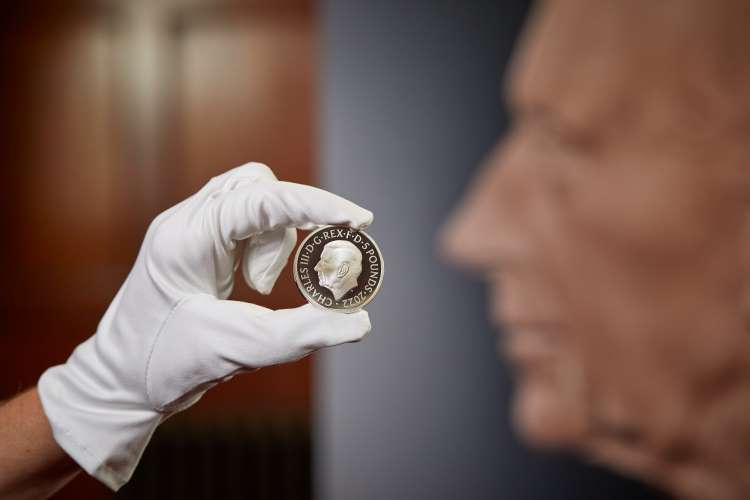 The Royal Mint has today unveiled the first coin to bear King Charles III’s portrait, a 50p coin due to enter circulation later this year.

To mark the historic moment of the King’s accession, the 50p coin will enter circulation as the coins are produced by The Royal Mint over the coming months.

According to the Mint there are approximately 27 billion coins currently circulating in the UK bearing the effigy of Queen Elizabeth II. As with other official symbols of Queen Elizabeth II, the new and old coins will co-circulate, to be replaced over time and following demand for new coins.

The Royal Mint has depicted Britain’s Royal Family on coins for over 1,100 years, for every monarch since Alfred the Great. It is responsible for the official Coinage of Britain as well as producing commemorative and historic coins, from its base in Llantrisant South Wales.

Following historic tradition, The King’s portrait faces to the left, the opposite direction to Queen Elizabeth II.

Jennings began his work on the portrait by studying a large number of photographs of The King.

“To present just one side of somebody’s head, you have to understand how the head works in the round”, Jennings says.

The portrait was modelled in plaster roughly the size of a dinner plate, with its fine detail worked by hand.

As with all coins produced by the Mint, once the model is complete a non-contact scanner is used to create a digital file so the design can be digitally reduced to the correct size for the coin.

A laser cutting machine is used to cut the design into a piece of steel to produce the ‘die’ that will strike the coins. After up to three strikes with a force of 200 tonnes, depending on the precious metal, each coin is inspected to ensure there are no visible marks or imperfections. This is the process behind the phrase “mint condition”.

Jennings has a calligraphic background and explains that the font of the lettering within the design was also of great importance to him.

The design on the reverse of the 50 pence coin commemorates Queen Elizabeth II’s reign. It features a design by herald painter Edgar Fuller and modelled by Cecil Thomas that originally appeared on the 1953 Coronation Crown.

The four quarters of the Royal Arms, each within a shield, appear in a cruciform arrangement, alternating with the emblems of the home nations: a rose, a thistle, a shamrock and a leek.

There will also be a commemorative £5 coin featuring two new portraits of Queen Elizabeth II on its reverse side. This design was created by artist John Bergdahl in collaboration with The Royal Mint and will form part of a larger memorial collection, due to be released at 9am on Monday 3 October.