Picks of the month: design events to catch in June 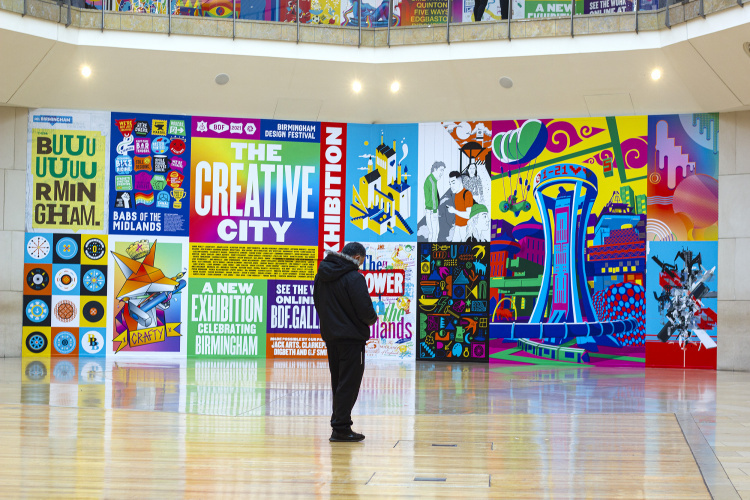 Picks of the month: design events to catch in June

The annual Birmingham Design Festival will take over the city centre for three days this month, with the theme of freedom at its heart. There will be 60 free talks to attend, followed by three evening events, plus a wide selection of workshops. The line-up, which includes 80 speakers from the graphic, digital, product, and illustration sectors, is all part of the festival team’s pledge to “connect designers to people that matter”.

The festival’s Creative City exhibition will also be returning to the Bullring, after making its debut last year. The exhibition will include work from over 100 of the region’s illustrators, designers, typographers, printmakers and artists, stretching across all three floors of the shopping centre. Expect plenty of discussion around creative freedom in the industry, as well as a variety of hands-on workshops.

Birmingham Design Festival is held across various locations across the city, from 9-11 June. For more information visit the festival website.

In this talk, Holly Catford of Esterson Associates will discuss the world of editorial design and collaboration, largely focussing on making magazines. Her aim? To highlight that magazine making is a team effort. Fittingly, her ethos is: “Everything I do is better when I work with other people.”

Catford will be discussing projects she has worked on over the last ten years, including Pit magazine and Cheese magazine (both of which she founded). This year, she was shortlisted for art director of the year at the British Society of Magazine Editors. Catford has also undertaken various projects as art director of History Today, art editor of Eye and Pulp, and has worked on redesigns of The Guardian and The Sunday Times.

Sharing the stage are four of her favourite collaborators: co-founder of Pit Robert Billington, socially-influenced reportage illustrator Reena Makwana; illustrator Sarah Cliff whose work has appeared in the New York Times and Refinery 29; and Wendy Wong who brought her personal experience to the tricky subject of MSG, a controversial food ingredient, for the ninth issue of Pit magazine.

The talk will take place at the St Bride Library in London and online, on 16 June. Tickets are available on the St Bride website.

Book: Who the Hell is Müller-Brockmann?: Conversations about the Swiss Style, by Demian Conrad

For his upcoming book, Swiss designer Demian Conrad has materialised a week-long research project which raises questions about Swiss style typography in field of graphic design. With a focus on typesetting, Conrad attempts to explore its impact on a global community, the success and failure of design manifestos, the value of cultural exchange, and whether the contemporary scene is still truly innovative. The book studies the authority of the Swiss style, compares graphic design approaches and analyses exchanges with different specialists.

It contains conversations with experts, including anecdotes, stories and scandals involving typographers, graphic designers, artists and curators. Included in this volume are design artefacts from Conrad’s guests, each representing the diverse interactions of Swiss typography within international design scene. Conrad’s aim is to build a bridge between the typographic traditions and practices, celebrating dialog and collaboration without ignoring divergence and conflicts.

Who the Hell is Müller-Brockmann?: Conversations about the Swiss Style, by Demian Conrad is published by Niggli Verlag. It is available to buy on 30 June for around £12.

The Right Aligned programme is centred around a series of talks addressing the issues facing the design industry. It features students, graduates, juniors, freelancers and founders across its “In Conversation” sessions. Its aim is to “empower the creators of tomorrow by sharing the story of people working in the design industry”.

This month’s event aims to explore the experiences of people that have or continue to be affected by mental health. The panel includes Koto studio creative director Deanna German, Bristol-based Bellow studio founder Gareth Rutter, and Studio Beuro founder and graphic designer James Kirkup. Audience members are encouraged to participate in the conversation, so questions are welcome at the talk. All content is currently virtual and can be accessed from anywhere.

The talk will take place online on 17 June. Tickets are available at Eventbrite.

Sustainability is the key theme of this year’s Salone del Mobile in Milan, which returns as an in-person event for the first time since 2019. This year, the festival features over 2,000 exhibitors, of which more than 600 will be under 35. This unusually high number of young designers reflects the show’s effort to facilitate future generations who “have grown up in a crisis”, which is why their work will be showcased prominently at the entrance.

In an effort to set an example for other exhibitors, the organisers have tried to ensure that all materials used in the show and in communal spaces are reusable or upcycled, and made from low-environmental-impact materials. Made entirely of upcycled and recycled waste products and materials from natural supply chains, the star of this year’s show is architect Mario Cucinella’s 1,400 sq m Design with Nature. Participants can choose to interact with each other or be alone among various elements of greenery in this installation. You can read our preview here.