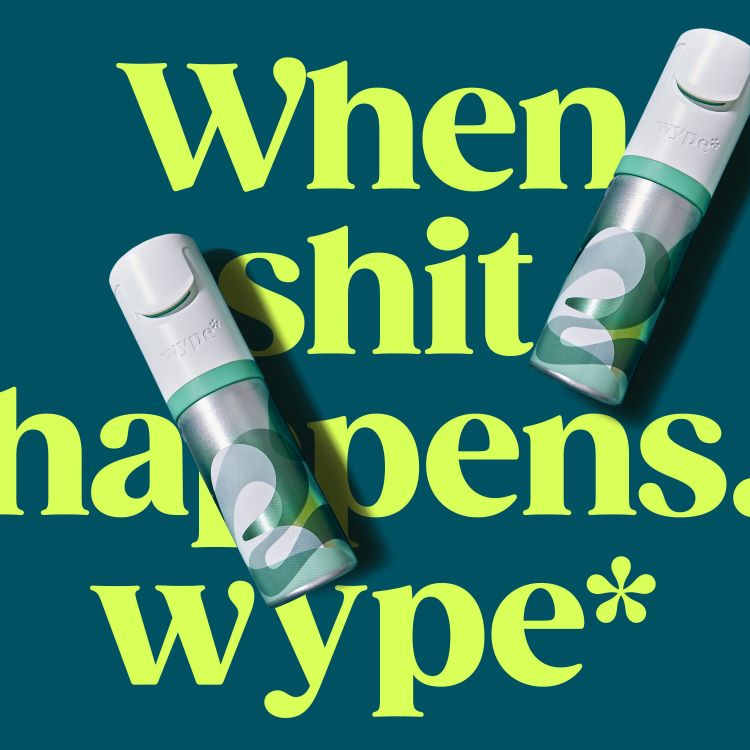 Among Equals has rebranded “below-the-waist wellness company” Wype, with a “cheeky ass-terisk symbol” at its centre.

Wype is a gel that can be applied to regular toilet paper, changing it into something similar to a wet wipe. Since actual wet wipes have a negative effect on the environment when flushed down a toilet, Wype aims to offer an eco-friendly alternative.

According to Among Equals founder Emily Jeffrey-Barrett, people are becoming “more and more conscious of the impact of their choices” so, while Wype gel’s purpose is to keep people clean, it is also “solving a real, urgent problem”.

Jeffrey-Barrett explains that the initial brief described a brand that wanted to “bust taboos and get people talking about things they’d rather keep private” and work for a wide audience. She adds that Wype was already using “sassy puns and funny takes on hygiene”, giving the studio a good starting point.

The carefully placed asterisks took inspiration from Wype’s slogan, “Keep it clean”. Jeffrey-Barret says that the phrase refers to what the product does for people on a personal level, but also alludes to the fact that it “keeps the planet clean”.

She adds that the “ass-terisk” was also chosen because the symbol is often used “to keep language clean in swear words”. It is also “a cheeky and very subtle nod to the area Wype helps keen clean,” Jeffry-Barrett explains.

Using the symbol so extensively – “overtly in copy and icons and subtly in packaging and typography” – means that Wype will be able to “build memory structures and recognition more rapidly”, says Jeffrey-Barrett.

For the main typeface, Among Equals chose Gazpacho, which Jeffrey-Barrett describes as “a modern, juicy, friendly serif chosen for its curves”. She adds that Gazpacho aims to mirror the asterisk symbol and the gel product itself, while “softening the overall brand aesthetic”. The secondary font, TT Commons, is “a clean, simple supporting font that works for everyone everywhere,” according to Jeffrey-Barrett.

The studio tried to illustrate the brand’s “Keep it clean” slogan through the colour palette. The combination of “aqua” blue, teal, lime green and light pink “mist” seeks to make the brand work for all ages with a “fresh and bright” but simultaneously “grown up and sophisticated” feel, says Jeffrey-Barrett.

“Cheekiness is a core personality trait of this brand”, says Jeffrey-Barrett, adding that Brits are reluctant to talk about “taboo” topics. She says that the worst outcome for an ad is to be “ignored and forgotten”, so launching with a bold, disruptive message should “get people talking”.

Subversive political statements on posters sit “firmly at the disruptive side of the brand”, says Jeffrey-Barrett. While Wype is not instinctively political, it is a brand that “enjoys being playful” and, according to Jeffrey-Barrett, this kind of communication serves to “help get them noticed”.

Alongside the boldness, Jeffrey-Barrett says Among Equals also worked on a “more caring and sophisticated side” of Wype. This more grown-up tone of voice is for the website, the product and its packaging, to avoid someone taking offense to “a package that lands through their letterbox,” she adds.

Among Equals worked with Wype on the art direction of the photography, which was shot by Brighton-based studio Veega Tankun.

Jeffrey-Barrett says that Wype is “meant for everyone, everywhere, any time”. She adds, “You can keep it in your bathroom, you can stick it in your bag, and you can take it to Glastonbury et al in case you get caught short at the long drops.”