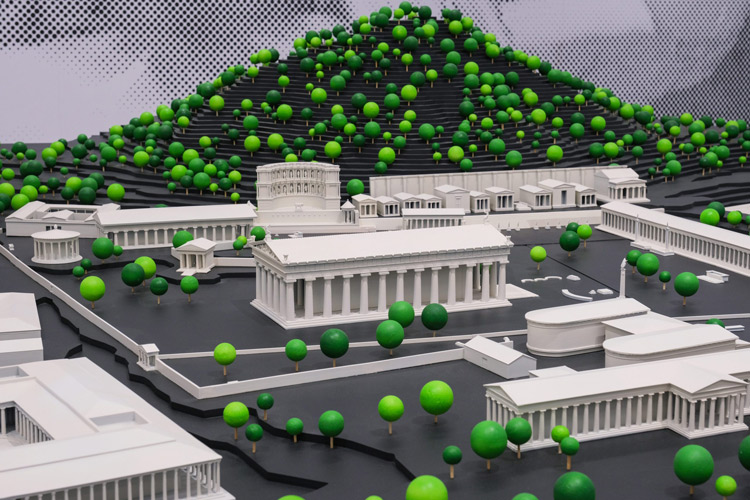 The Ancient Greek sanctuary of Olympia birthed the Olympic Games more than 2,000 years ago. It was also the site of the 41-metre-high Statue of Zeus, designed and built by the famed Greek sculptor Phidias.

Once considered one of the Seven Wonders of the Ancient World, the statue has long been lost to time – as have many of the other architectural elements that once stood on the important site. As part of Microsoft’s AI for Cultural Heritage programme, the company and A_DA has used cutting-edge tech to rebuild the site for visitors to explore in-person and digitally.

“A blend of creativity, advanced technologies and modern storytelling”

For those actually at the site in Olympia, the experience is weaved together with an immersive tour and in-person exhibit at the Athens Olympic Museum. Visitors will use an interactive app to navigate. Meanwhile those elsewhere in the world who want to experience the rebuilt Olympia can do so via a web-based platform. Microsoft president and vice chair Brad Smith calls the experience “a blend of creativity, advanced technologies and modern storytelling”.

The project has digitally preserved 27 monuments on the site, including the Olympic Stadium, the temples of Zeus and Hera, the workshop of the sculptor Phidias and the huge Zeus statue.

A distinct five-day narrative is used for the experience to guide visitors through different elements of the site. Over the course of these shortened days, users can watch activity from the ancient Olympic Games and can contribute their own thoughts about the games with audio and text.

Those experiencing the Olympic Games at the Athens Olympic Museum can also use a Microsoft HoloLens 2 headset to further immerse themselves in the experience. For example, when they tilt their head up, they will see the towering Statue of Zeus; if they turn left, they can see Phidias’ workshop. AI-enabled auto-translation brings the experience to users in more than 20 languages.

“Hundreds of thousands” of images

To create the digital experience, the studio used a “foundational model” of Ancient Olympia, which A_DA says was created using “hundreds of thousands” of images taken at the site.

The images were then processed using Microsoft AI technology to create a photorealistic 3D rendition of the area.

According to the studio, the intricate process took 18 months to complete, and required close collaboration with the Hellenic Ministry’s archaeological team to ensure historical accuracy.

Using technology to preserve the past is an increasingly common practice among cultural institutions and designers. In the early days of the Covid-19 pandemic, Design Week reported on how museums and galleries were using technology to enhance their online offerings while doors remained shut.

Being a part of this trend was an attractive prospect for the A_DA team, according to studio co-founder Brett Volker. “The opportunity to not only help digitally preserve the site for everyone, but also to educate younger generations using mediums that are increasingly going to become the way they learn about our history in the future, was hugely exciting to us,” he says.

Meanwhile executive creative director Inessah Selditz says the project is largely indicative of the appetite of audiences in 2022. “With the tremendous shifts that have occurred the last year and a half, cultural institutions are fundamentally re-thinking how they show up and connect with 21st century audiences,” she says. “In turn, audiences are eager for more immersive, participatory and accessible experiences that are storytelling in ways they are excited to engage with.”

What do you think of the rebuilt Olympia? Let us know in the comments below…