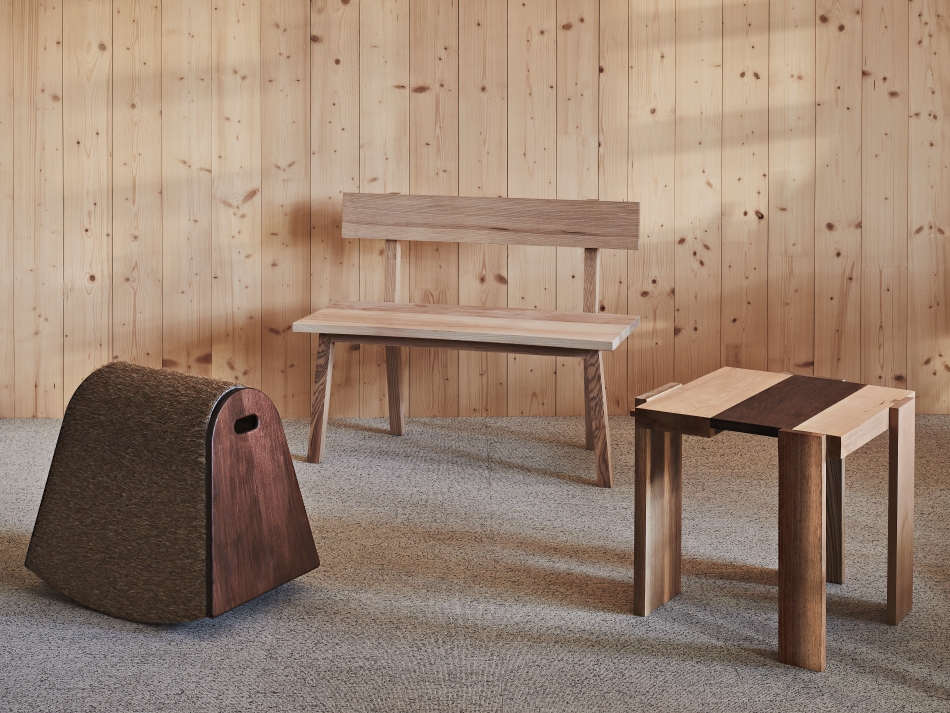 Social enterprise Power Out of Restriction (POoR) Collective and workspace provider The Office Group (TOG) have revealed the projects designed by students on its Makers and Mentors programme for TOG’s latest office space The Black & White Building.

As central London’s tallest mass-timber commercial structure, The Black & White Building has an emphasis on sustainable materials, local design and social connectivity that TOG wanted to incorporate into its design – including providing an opportunity to support the next generation of designers.

Charlie Green, co-founder and co-CEO of TOG explains that the Shoreditch area was familiar to him and co-founder Olly Olsen, having been based just across the road at 81 Rivington Street early in TOG’s history. TOG first purchased an original iteration of the Black & White Building in 2005 – “a small 10,000 sq ft building with an old Victorian Warehouse and a “pretty horrible” brick extension added in the 1980s, Green says. Painting it black on the outside and white on the outside, which gave the building its name, TOG created a “brand-led offer for smaller businesses” looking for workspace, with added incentives such as regular art exhibitions for emerging artists and food trucks in the courtyard. Reflecting on the building’s popularity – and waiting list – Green explains that TOG wanted to create something bigger to meet the demand.

While there was planning permission for a larger building – “a really grim steel and glass structure that was just not right for that area” – TOG looked instead for a sustainable alternative that fit within the consented scheme, resulting in a fully engineered timber office building by Shoreditch-based Waugh Thistleton Architects (WTA). London-based Daytrip Studio was chosen for the interiors, while other designers working on furniture and fittings include Sebastian Cox, Matteo Fogale and Andu Masebo – who also became the mentors for the programme.

Green explains that while TOG has previously looked to support small, local businesses with schemes such as TOG 100, TOG Futures, providing opportunities such as free office space and mentorship, “here was an opportunity to try and support some younger designers”.

TOG approached POoR Collective for its expertise working to empower young people through co-design and creative output projects, explains POoR founding partner Shawn Adams. For this project, he says, “TOG was very clear that they wanted to do something innovative because it was for The Black & White Building, where they were already doing something really innovative”.

“We came up with the idea that some students could design some elements for the building”, Adams says, which “would be a great opportunity for them to gain some skills, but also diversify and build their existing network” – something usually out of reach until long after university, he explains.

Students in their second and third years of study from a broad range of design courses were invited to apply by submitting a two-minute video. After the students were selected, the pairings were made based on mutual interests and skills between mentee and mentor. Isobel Browne-Wilkinson, a student of 3D design & craft at the University of Brighton, was paired with furniture maker Sebastian Cox; Alejandro Canales, a second-year architecture student at Central St Martins, UAL, worked with Uruguayan-born designer and curator Matteo Fogale; and Emilie-Gabrielle Lemaitre-Downton, a second-year product design student at Ravensbourne University, was mentored by Andu Masebo, who specialises in ceramics, carpentry and metalwork.

During the six-week mentorship students were able to use their mentors’ studio spaces to design and build the products, were provided with materials by Lathams, a timber supplier for Black & White; and a £1000 stipend. The brief required that the designs be sustainable but remained open. While mentors would advise on processes, the “main aim was that they would actually be designing and building the piece themselves”, Adams says.

Further guidance ensured it wasn’t just a case of “jumping straight into a design but going through the process”, Adams says. “If they were going to make something professionally, what do you need?” For the Mentors, meanwhile, “we set out tasks that would be good for the mentors to cover, but it was down to the mentors how they wanted to support the students”, Adams explains.

Texas-born Canales designed a rocking horse seat, following an initial presentation that looked at playfulness and growing up. Canales was interested in furniture design, Adams says, but also “wanted to create something that was quite dynamic, so people aren’t just sitting in the space”.

Green adds, “they’ve got movement, and you don’t know that until you sit on it” and explains that its seat uses leftover carpet tiles from the building’s new interiors – which gives it a feel “almost like a horse”.

Browne-Wilkinson “was interested originally in this idea of the direction of the Sun and how it moved across The Black & White Building”, Adams says. She translated this idea into a pair of seats, one with a concave curve and one with a convex one. Green adds, “it makes a bit curious because you think I am I saying I’m not seeing that right. And when they sit together, it’s really beautiful”.

Located in the ground and lower-ground floors – the communal areas of the building, available for use by TOG members from any of its locations – the pieces have a strong visible presence within the building.

“They’re making pieces that The Office Group actually cares about because they’re not pieces that are just going to hide in the back of the building. They’re really at the forefront of the spaces, which I think is really quite powerful”, Adams says.

“It gives young people the opportunity to not only design something but actually see it being built and see people interact with it”. He adds: “I think if we are to really empower the younger generation, we need to see more opportunities like this.”

Meanwhile, Green also describes the relationships built on the programme as “very two-way”.

“They’ve really created something that we would want to have in this building if it were made by SCP or Vitra. These are interesting, quality pieces and it’s amazing when you give that kind of latitude to somebody”.

He adds: “I’m a firm believer that it’s OK for us as a business to benefit from something that is trying to be a bit more altruistic and give back. It’s good for the story and we get these great pieces, but I think you take that a step further and I think the relationships between the makers and the mentors were really strong and genuine, and the mentors also got a lot from it.”

The Black & White Building officially opens on 17 January. There are also further plans to repeat the scheme, according to Green. “It’s been a really worthwhile programme. It’s been a lot of fun, and we’ve met some really great and talented people – and we’ll be doing it again”, he says.