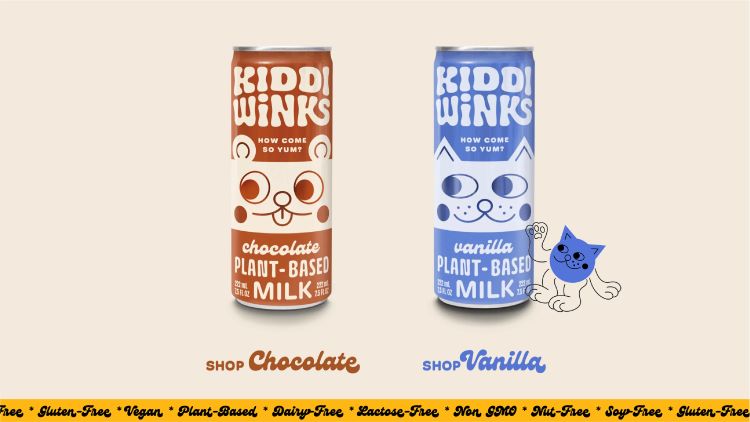 The drink’s formula comprises oat, chickpeas and chicory root, providing eight grams of plant-based protein, more than six grams of fibre – which is not found in cow’s or other non-dairy milk – and a prebiotic for microbiome support. Young Jerks are responsible for KiddiWink’s branding and packaging.

According to Young Jerks senior art director Kelly Thorn, the brand required a “memorable, eye-catching” identity and packaging system that was “both elevated and kid-friendly”.

To fulfil this, Young Jerks opted to incorporate illustrated mascots into the brand, which they later named the Winks. Thorn says that illustrative style makes the brand “warm and inviting”, while also helping both kids and parents to understand the brand’s storytelling.

KiddiWinks hand-drawn logotype was designed by Young Jerks to look “gloopy and milky”, says Thorn. She adds that the chosen secondary typefaces – Caspar by Alexis Boscariol from Future Fonts and Genty from Flavor Type were “natural next steps”, as they adopted a similar style to the hero typeface. Visby Round by Connary Fagen is used for larger chunks of text, which Thorn describes as “a soft serve” body copy text.

While Thorn says supply chain issues presented challenges for Young Jerks, Wildish & Co managing director Sam Fresco says that “tackling alt-dairy and the Alpha audience” through this brand was a test for them. Gen Alpha incorporates people born between 2010 and 2025, so everyone in this generational bracket is under 13 or yet to be born.

Fresco says that, although there has been a “massive explosion” of brands in the plant-based sector, not many of them are designed for Gen Alpha, making this brand one of the first to operate in this space.

Wildish & Co was tasked with carrying the strong personality and voice from the brand system over to the website. Although the brand itself is targeted at children, the website and its purchasing and nutritional information had to appeal to parents. Fresco says the studio worked to “build a bridge” between the two target audiences, aiming to make it “exciting and educational”.

The illustrations were crucial in “breaking down all the research and science backing the drink”, Fresco adds. Wildish & Co used the characters widely across the website, creating “a sense of spirit and tone” to lift the brand off the screen, he explains.