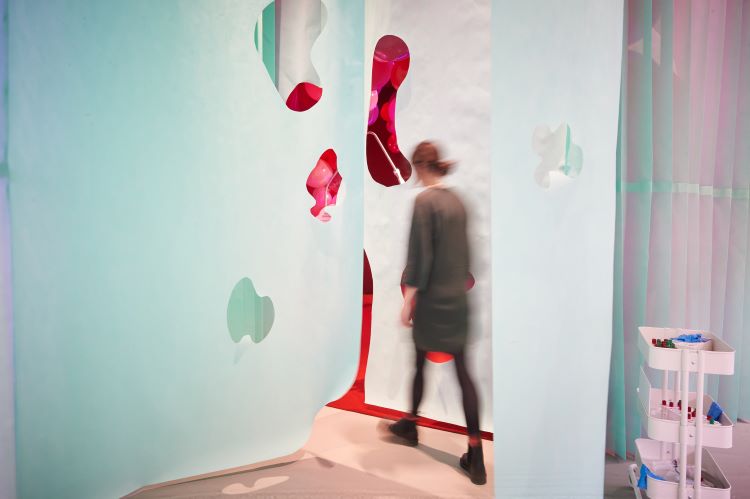 The Liminal Space has designed the exhibition In Theatre, which urges people to consider how technology and AI can be used in a surgical setting.

Working with The Wellcome / EPSRC Centre for Interventional and Surgical Sciences (WEISS), the studio set out to create a space that would showcase futuristic innovations from researchers in engineering and clinical sciences at University College London (UCL). The Liminal Space’s art director Laura Gordon says that often the topics in this research can seem “complex and abstract to many people”.

Most research papers use dense academic language, which Gordon says can “create a barrier in public understanding” resulting in people “feeling uncomfortable and fearful about the safety and ethics of using robotics and AI”. To tackle this, the exhibition is meant to cater to people of any age without scientific or medical backgrounds.

The space is divided into three different zones, each representing a different perspective of surgery.

IV bags hanging down by the doorway pose questions for visitors to consider before entering the main part of the exhibition. Designed to look like the inside of a hospital, the first zone features a “medicalised corridor with medical curtains, screens and trolleys” marking the start of the journey into theatre, says Gordon.

Blue and green tones paired with harsh bright lighting add to the “clinical, wiped-down” feel of the space, she adds, seeking to “ground visitors in reality” before moving onto the next zone.

Approaching the second zone, visitors are faced with a constricting narrow corridor, representing the uncomfortable nature of surgery, with “cut-out organ shaped holes in the curtains”, explains Gordon. She adds that these openings are “a reference to keyhole surgery” and offer small viewpoints of the body before being “confronted with the bigger picture”.

Mimicking the inside of the body, “tonal pinks and reds” appear in “lumpy, rounded 3D shapes to add texture and warmth”, says Gordon. Visitors are greeted by floating hands designed to look like the arms of a da Vinci surgical system, which is already used in theatre. This installation aims to draw attention to the fact that “robotics surgery allows surgeons from around the world” to work from remote locations, Gordon adds.

Interactive elements appear in this section, with a ball pit that “invites visitors to play at being the AI” and reach in to find “abnormal cells”, she says. Each abnormal cell has information on it about the use of AI in surgery.

The “Bowel Buzz Wire” uses the concept of a children’s game to encourage visitors to test how steady their hands are. The point of this installation is to show that humans can have unsteady hands – something which robots do not suffer from – to make people “think about the benefits” of robotics in surgery.

In the background, sounds from inside the body – like “breathing and heartbeats” – play on a low volume out of speakers, which is a way of making the space “more immersive” and the visitors “more receptive” to the zone, according to Gordon.

The next zone covers similar topics, except they are explored through the lens of a machine. Black plastic covers the walls in this space, spotlighted by “fluorescent green” lighting, which Gordon says adds to the “futuristic, machine-like aesthetic”.

“A neon green crosshair symbol recurs throughout the installation, which we discovered through real footage of AI being used in theatre to find polyps, its geometric shape contrasting sharply with the organic softness of the human body elements to anchor visitors back to the original narrative of AI and robotics in surgery,” she says.

The larger screen in the centre of the wall space shows moving visuals which explore what future surgeries could look like with the help of AI. Gordon explains that it is meant to demonstrate how “having the robot there frees the surgeon up to have wider oversight”.

Providing a cyclical structure to the space, visitors exit the machine zone back into the hospital, but this time they find themselves in a recovery room area. The “homely, relaxed space” seeks to make to the point that AI surgeries could mean “facilitating better recovery at home” says Gordon.

A diffuser releases “fresh scents” next to an armchair, which Gordon says visitors can sit in while they listen to “audio taken from real people’s testimonies of their experiences of robotics surgery, playing out of a transistor”.

Before leaving the exhibition, visitors can speak to researchers from UCL “who have designed some of the technology explored in the space” if they want to hear about the concepts in more detail, says Gordon. She adds that there is also an opportunity to write down any feedback on a notecard that will be displayed in the window alongside “medical objects, props and a glossary of different medical terms to debunk” so people passing by can engage with the content.