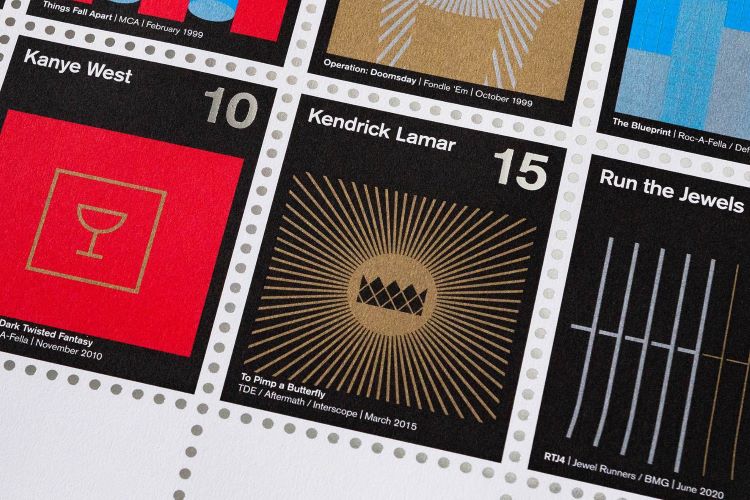 Hip-hop and stamps may not typically go hand in hand, but that’s the inspiration for design studio Dorothy’s latest print series. The design team has picked some of the most influential hip-hop albums of the past four decades – from Beastie Boys to A Tribe Called Quest – and reimagined the landmark titles as oversized postage stamps. Each entry has a graphic which nods to the album or signature track, the date of release, the publishing label and its running time. For Missy Elliott’s 1997 album Supa Dupa Fly, a raindrop motif nods to the album’s lead single, The Rain. Dorothy’s series has 42 covers to keep hip-hop and design fans entertained.

Brighton Museum & Art Gallery’s latest exhibition on women’s football tracks the history of female footballers from the end of the 20th century to the current day. United Us, also based in Brighton, is responsible for the visual identity which aims to showcase past stories and highlight the opportunities to come for women players. Based around the idea of “power in play”, the visuals hope to convey a sense of “momentum, progression and empowerment”, says the design team. Perhaps the most playful part of the identity are the player cards – a riff on the collectible trading cards that traditionally feature male players. “We wanted visitors to the exhibition to feel moved to champion women’s football by creating this desire for something that is collectible, and so readily available in the men’s game,” explains United Us. These cards feature throughout promotional material and in the exhibition – shining a light on historic players like Joan Whalley, the first British female footballer to be featured in a national advertising campaign by Nike.

Graphic designer and lettering artist Abraham Lule has crafted the packaging for Mezcal Vago Elote, a mezcal which has a special ingredient: corn. The label features wood-engraved vignettes, which aim to add “romance and a hint of nostalgia to the storytelling”. The art direction meanwhile is a nod to Oaxacan wood carving, explains the designer – evoking the fields where corn is grown alongside agave (a key ingredient of Mezcal). The label has been printed on paper made of recycled agave fibre, using leftovers from the mezcal distilling process. The pulp is then developed into paper by local artisans. As well as providing a more sustainable approach to materials, it helps create a more evocative drinking experience, according to the designer – “drinkers can see the texture as they turn the bottle and explore the story.”

Installation: Around the World’s Table, by Giorgia Lupi

Pentagram partner Georgia Lupi has created Around the World’s Table, a new installation which seeks to highlight the global impact of food production and consumption on the planet. The exhibit combines Lupi’s signature data visualisation techniques with the lush surroundings of the New York Botanical Garden, where it’s on view until 11 September. Around the World’s Table is located in the reflection pool, using the basin as a visual metaphor for the world – the installation represents the percentage of habitable land used for agriculture (around half). 100 partly submerged sculptures represent the major food groups and their respective carbon footprints. The design team has customised the sculptures by colour, height and placement, according to figures from the United Nations Food & Agriculture Organization and open-source research platform Our World in Data. “We have an opportunity to tell nuanced and complex human stories with data,” says Lupi. “The parameters we chose to represent in the sculpture allowed us to offer multiple visual narratives for the visitor to interrogate and inquire on their own terms.”

While many worry that technological advances could displace creativity and replace traditional craft, what if the two could work in tandem? Design studios FutureDeluxe and Modem worked with ceramic artist Frew Gwatkin to produce a collection of jugs, plates and bowls, which incorporate generative processes. Instead of the traditional approach where a craftsperson might work in a pottery studio, FutureDeluxe crafted a “generative set of rules” to refine what it calls “raw digital material”. And instead of mimicking production tools like wire slicers, it then whittled designs according to concepts like mathematical noise. These designs were crafted in clay by using a 3D printer. “In the design process, we discovered an emergent aesthetic perspective, equal parts systematic and intuitive, informed by algorithmic parameters, human taste, machine capacity, and the serendipities of material production,” explains the design team at FutureDeluxe.

Kurk rebrand, from Among Equals

London-based consultancy Among Equals has rebranded liquid supplement Kurk (previously called Truth Origins), inspired by the concept of “liquid gold”. Kurk is a curcumin supplement, an ingredient in turmeric, which the company says can fight a range of issues from stress to sleeplessness. Thanks to the ingredient’s yellowish gold colour, Among Equals played on the idea that the product is “liquid gold for health” with a gold colour palette, liquid letterforms and droplet patterns. The tone of voice also aims to highlight the product’s preciousness, explains Among Equals founder Emily Jeffrey-Barrett.