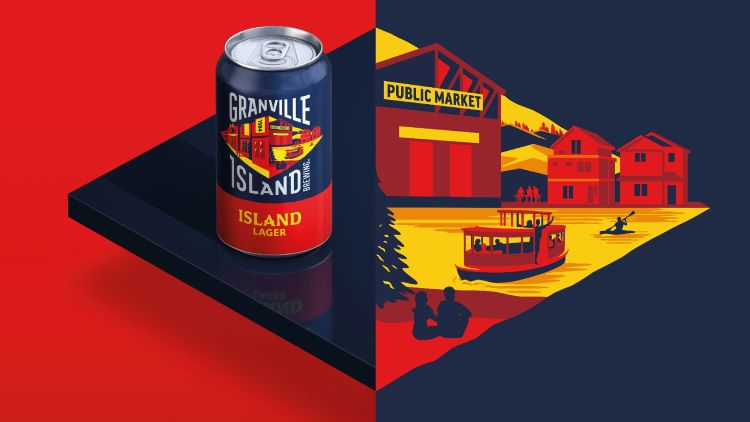 BrandOpus has overhauled the identity of Canadian microbrewery Granville Island Brewing, drawing inspiration from the lifestyle of the “do-ers, seekers and adventurers” of British Columbia.

Granville Island Brewing was the first microbrewery to open in Canada in 1984. As all of its brews are developed on site and aim to resonate with the craft-beer-lovers of west coast Canada, the owners expressed a need for “a brand identity and visual system to reflect this,” according to BrandOpus senior designer Maddie Freestone.

Freestone explains how “establishing the brewery’s location in Granville Island” was just one aspect of the new brand. Depicting different regions across British Columbia, as well as “the activities that a region has to offer”, was equally important, she adds.

Illustrator Antony Miller was chosen to draw the new brand artwork because of his “graphic style and ability to craft complete scenes with simplicity and depth”, says Freestone. She adds that he is skilled at working with a “limited colour palette”, which fits with the requirements of Granville Island Brewing’s new identity.

Framing the new illustrations is a large diamond shape, which now lies centrally within the brand. Freestone says that the diamond was “an existing visual asset” widely recognised by current drinkers but it was not reaching its full potential in the old identity. BrandOpus’ aimed to “reimagine the symbol to establish a new visual narrative for the brand,” Freestone adds.

Making the brand stand out in a crowded market, where most craft beers have some form of modern illustrative design, was “a significant challenge”, according to Freestone. By constructing the identity around “the visual equity of the diamond” and “shifting to a brand blocking colour strategy”, Freestone says that Granville Island Brewery’s identity is more likely to “stand out at the fixture”.

The studio worked with type designer Alan Levett to craft a new bespoke wordmark, which is designed to work alongside the enlarged diamond shape. Freestone says that the redrawn wordmark incorporates some of the “visual quirks” from the older wordmark.

Each brew also has its own individual typography, which is meant to relate back to the location and the style of the brew. Freestone explains how the studio used existing fonts but “adapted certain features” to get the desired effect for each drink. She adds, “In some instances, it was important to resurrect typographic styles that had existed in past design iterations to reconnect drinkers with the more established brews that had lost some recognition.”

Granville Island Brewery’s new identity has started to roll out across all formats of primary and secondary printed packaging. The signage, interiors and exteriors of the brewery are in the process of being finalised. Freestone says that a brand style guide has been created “for future execution and activations of the brand”.