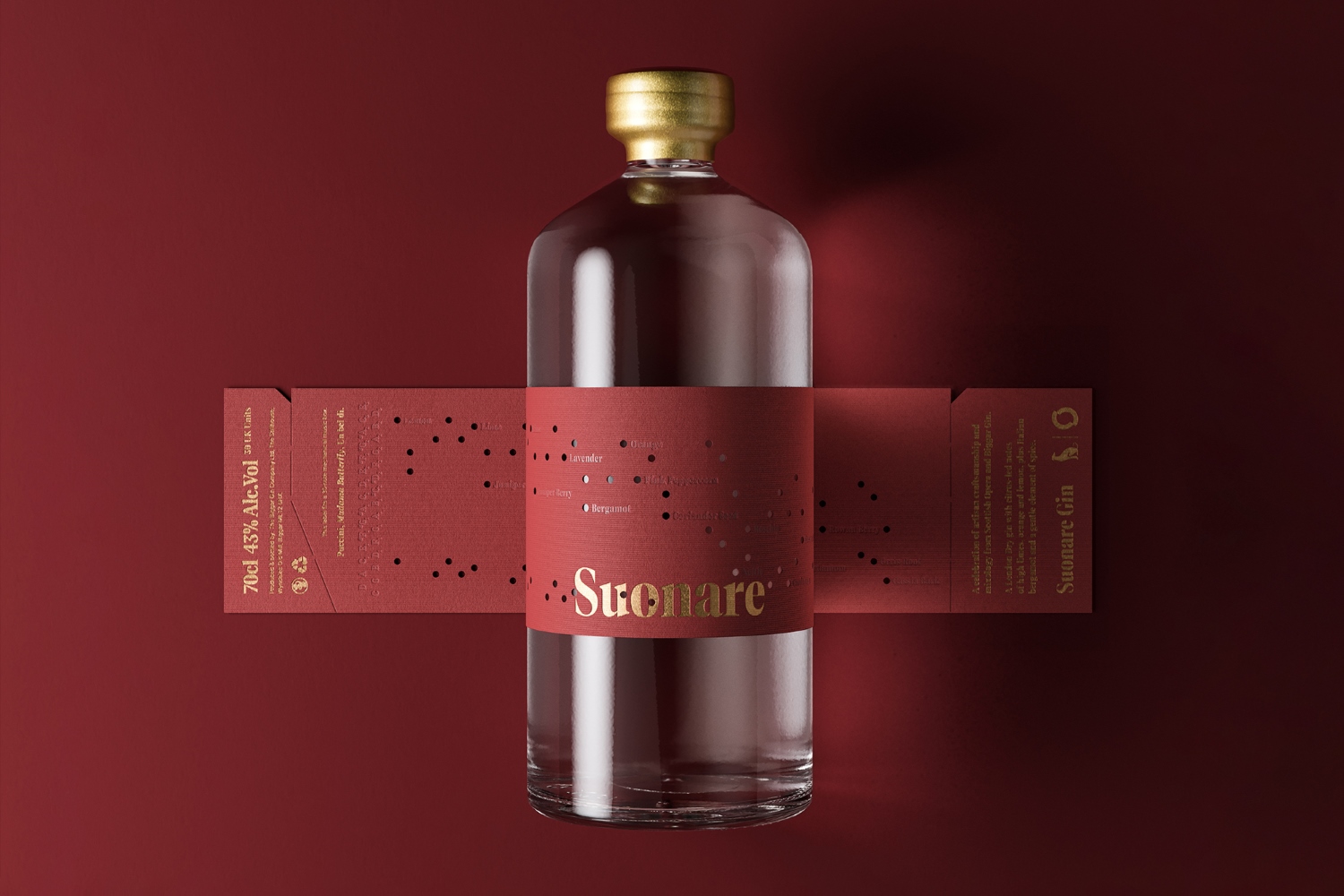 Glasgow-based studio Tangent has created the branding and packaging for Suonare gin to celebrate Scottish Opera’s 60th anniversary, working with local distiller Biggar Gin, with a project that blends “mixology and musicology”.

At the core of the concept was the collaboration between different artforms, explains Tangent designer Katrina High, who came up with the concept. She says that the idea of matching the botanicals to a music scale developed “organically” while researching the process, with the team also looking for “a way to visualise the music”.

“Being able to actually visualise the taste profile of the gin felt like we were taking the brand somewhere new and original”, she says.

Following the name of the product, Suonare, which translates as “to play”, the product’s twist is that the label can play music when passed through a music box.

“We were excited by the prospect that this visualisation could push that bit further and go on and function as an actual sheet of music”, High adds.

This twist also hopes to offer something lasting to the opera’s patrons to commemorate the anniversary. The music played by the label is ‘Un bel di’, the signature theme from Madama Butterfly, first performed by the Opera in its opening season 60 years ago.

The graphic system is created through die-cut perforations in the bottle label, creating a minimal design that is “completely different to what you would expect from a gin label”, Tangent co-founder David Whyte says.

“From the Opera’s point of view, if they were going to release a product, they didn’t want it to look gimmicky”, Whyte adds, with the Opera wishing that a “feeling of craft and an artisan approach was maintained” throughout the process.

Meanwhile the different collaborators’ expertise was used throughout. Scottish Opera’s director of music arranged the notation for the label, and the head distiller from Biggar Gin helped to pick out the appropriate pitches for each of the botanical’s tasting notes, ranging “from sharp Lemon through to earthy Cassia Bark”, Tangent says. The botanicals themselves were selected to reflect Italian opera history, High explains.

To meet the challenges presented by the concept, “there was a lot of experimentation”, Whyte says.

To fit through the music box the label needed to measure only 7cm in height – smaller than most gin labels, High explains – while it also required the label to not be stuck to the bottle. “Which is actually quite a tricky thing to do”, Whyte adds. The solution was to fix the edges in place, with perforations to allow the rest of the label to be removed.

It also informed the decision to place “all the essential text on the back of the label”, with the “keepsake design” remaining minimal and uncluttered, High adds.

The die-cut circles also needed to be removed from the packaging by hand – High says they calculated it as approaching 24,000 circles across the limited-edition batch of 600 bottles – as well as wax-dipping the bottles in-person with the distillers.

With outputs now so often digital, Whyte adds, the team enjoyed the opportunity for such a “hands-on” project.